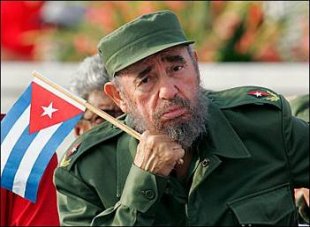 As Robby Soave noted and Ed Krayewski noted recently, there's muy partisan bluster surrounding President Obama's decision to change the United States' relationship with Cuba from 50-plus years of failed attempts at isolating the Castro brothers' personal tropical-island prison. Keep in mind that re-establishing diplomatic ties and other actions do not in any way lift the trade embargo, which needs to be done by Congress. Obama is in no way abusing his power as president in anything he's doing here.

Obama's actions may not be the boldest gambit imaginable, but it is a very good thing, I think. Our country's posture and policy toward Cuba has been a miserable failure for the past half-century that has done nothing to loosen the grip of an autocratic despotic regime over its own people. And it has accomplished nothing good for Americans, either, even those who were forced to seek refuge on our shores. America's Cuba policy is the very definition of government failure, something you'd think conservatives, who are always quick to talk about how government screws everything up, would recognize.

That said, the only thing more pathetic than excellent investigative journalist Jeremy Scahill's zinger about how he "is very glad I was able to visit Cuba several times before US tourists try to turn it into Cancun" is the response of Republican (and some Democratic) pols who are pledging to NEVER end the embargo as long as a Castro anywhere draws a breath (and Bacardi or U.S. sugar interests write a check). When Sen. Marco Rubio (R-Fla.) calls Obama's new policy "a victory for oppression, " the Cuban American is ignoring basic reality. American policy toward Cuba for the past 50-plus years was a victory for oppression, so complete that it allowed the odious Raul Castro to succeed his godawful brother as a maximum leader. Get it: American policy was so rotten it allowed for a hereditary transfer of power in the autocratic country under sanction. The only other places that have managed that trick are other targets of U.S. diplomatic isolation Syria and North Korea. As John McCain, who pushed to open up relations with communist Vietnam years ago but denounced Obama's actions toward Cuba, could tell you, America has no problem dealing with all sorts of morally despicable governments.

Simply put, Rubio and many other Republicans are confusing political posturing with principle and pragmatism (those last two are not always mutually exclusive). If the goal of the trade embargo and cutting off diplomatic ties with Cuba was to weaken the awful Castro regime, it's been a total bust. We're years into Castro 2.0 and there's zero reason to believe anything will change anytime soon. The only thing the U.S. stance has done is give the Castro brothers a false though handy explanation for every austerity measure they impose on their subjects and every act of political oppression they commit.

There's no question that Cuba is poor and miserable and unfree because of the Castros and the despotic regime they oversee. Cuba is free to trade with every country in the world except for the United States. The country's failure to flourish is because of the ruling junta, period. Anyone who suggests otherwise is denying basic reality.

@cjosiedoe1 @BillKristol you do know 5 of the justices were appointed by conservatives right? so by definition it can't be obama court Sat, 27 June 2015 06:03 AM

@Michael Steger: Conservatives by definition are stuck in some fantasy of the past Sat, 27 June 2015 07:05 AM