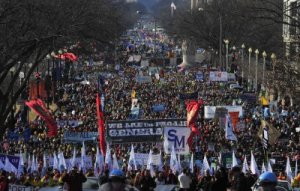 An emboldened group of moderate House Republicans put their leaders on notice this week that they intend to steer a more pragmatic course on social issues — including abortion, same-sex marriage and immigration — as the party tries to position itself for the 2016 presidential election.

About two dozen Republicans, led mostly by a small group of female lawmakers, forced the House leadership to pull an antiabortion bill from consideration and replace it with a less restrictive measure Thursday. The episode exposed a growing concern within the GOP that emphasizing culture-war issues in the new Congress could distract from the party’s broader agenda and upend hopes of retaking the White House.

“Week one, we had a speaker election that didn’t go the way that a lot of us wanted it to, ” Rep. Charlie Dent (R-Pa.) said. “Week two, we were debating deporting children, and again, not a conversation a lot of us wanted to have then. And week three, we’re now debating rape and abortion — again, an issue that most of us didn’t campaign on or really wanted to engage on at this time. And I just can’t wait for week four.”

The latest showdown also exposed a GOP leadership struggling to maintain control of a still-fractious party, despite its expanded majority in the House and its newly achieved majority in the Senate. A similar revolt by moderates erupted last week on a spending bill tied to immigration policy.

Thursday’s vote was a setback for the party’s most strident antiabortion voices, and it came as thousands of activists marched in the streets of Washington to mark the anniversary of the Supreme Court decision that legalized abortion nationwide.

In a show of solidarity with marchers, House Republican leaders planned to push through a bill that would ban abortions after 20 weeks of pregnancy. The bill included exemptions for cases involving severe health risks, incest or rape, but a rape victim could claim the exemption only if the attack had been reported to law enforcement.

The GOP critics, all of whom oppose abortion, said the bill went too far and would expose Republicans in swing districts to a barrage of attack ads in 2016 from women’s rights groups and Democrats. They worry that they could be particularly disadvantaged on abortion and other women’s issues if Hillary Rodham Clinton is the Demo­cratic nominee for president.

More robust moderate voices could affect the outcome of other contentious issues. Some of them have warned about the political consequences of a protracted fight over immigration reform. The House is expected to approve an aggressive border-security bill next week despite Democratic opposition.

The bill comes as Democrats and Republicans are fighting over funding for the Department of Homeland Security.

House Republicans passed a spending bill last week that would repeal Obama’s executive actions. But several moderates voted against the bill, warning that it went too far by revoking temporary legal protections for “dreamers, ” young people brought to this country illegally as children, who have served as the emotional centerpiece of the debate.

Crazy Abortion Bills In 5 States - Which Is The Worst?

Romney: My views on abortion rights are clear

@Shaun Sharkey: People need to stop thinking in terms of left/right. The real battle is between liberalism and reactionaries, religious or otherwise. Tue, 23 June 2015 06:45 PM