Conservatives pull ahead of Liberals, could be on cusp of majority: poll

WATCH ABOVE: It’s 2015 and that means another federal election is on its way. The latest poll for Global News show the federal Conservatives have jumped ahead of the Liberals. Tom Clark discusses the latest numbers.

OTTAWA — The tie is broken: Stephen Harper’s Conservatives have pulled out in front of the Liberals — and they could be sitting on the cusp of majority territory, according to the most recent Ipsos Reid poll conducted exclusively for Global News.

This is the year Canadians will elect a new government, and the Conservatives have started it off with an overtaking of Justin Trudeau’s Liberals. The two parties ended 2014 neck and neck, after the Conservatives had spent a couple of months rallying from behind.

With 308 seats at play, as had been the case from 2004 to 2011, pollsters tended to feel a party was wading into majority territory when it garnered 38 per cent to 40 per cent support form survey respondents, Wright said.

The extra seats, however, decreases that percentage, which means a four-point lead could be very close, if not directly in, majority territory, Wright said. 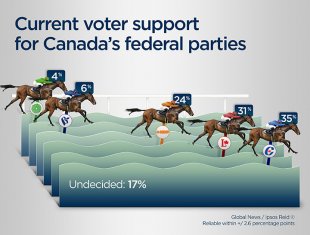 If Harper sticks to the fixed election date voters will head to the polls in October —that’s nine months and four days, or 277 days, away. In politics, that’s a lifetime.

Just four months ago, the Liberals were sitting comfortably atop the polls with seven points separating them and the second-place Conservatives. (See above re: nine months being a lifetime in politics.)

The NDP, meanwhile, remained static between polls, and still hold 24 per cent of the vote among those surveyed —more or less what the party polled at throughout 2014. The NDP’s piece of the action, however, is seven points below where the party was when it experienced the surge leading up to election day in 2011.

As for the Bloc Quebecois and Green Party, they commanded only six per cent and four per cent respectively of respondents’ votes.

So, what’s helping push the Conservatives back into voters’ favour? Do Canadians have a fear of change, or are voters creatures of habit? Maybe voters just think Harper’s doing a swell job.

There are a few factors driving the rally, according to Ipsos Reid’s Wright: First of all, the House of Commons is on break, and has been since the second week of December. What does that mean? No daily attacks and no controversies coming out of question period.

@ValckeNDP @1ProudCdn The liberals are not the liberal party of old where opportunism & expediency triumphs over ethics & beliefs! #cdnpoli Fri, 19 June 2015 09:48 PM