PRINCETON, NJ - More Americans continue to identify themselves as conservatives than as liberals on economic and social matters. However, the conservative advantage on each dimension is shrinking from higher points in recent years, down to 21 points on economic policy and four points on social policy. 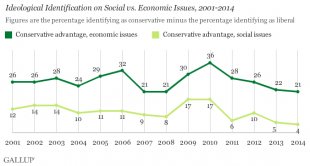 The trends toward lower conservative advantages were evident as far back as 2004 on social ideology and 2007 on economic ideology, though both were interrupted in 2009 and 2010 when President Barack Obama and a Democratic Congress passed left-leaning legislation, most notably the Affordable Care Act. In those years, the percentage of Americans describing themselves as conservative on the two dimensions moved back up, most likely in reaction to their perceptions of the more liberal administration. Since then, however, the trends have continued moving in a less conservative direction.

In the same poll, using Gallup's standard ideology question, 37% of Americans describe their political views overall as conservative, 25% as liberal, and 35% as moderate. That 12-point conservative-liberal gap falls in between the 21-point gap on economic issues and the four-point gap on social issues. But this general measure of ideology has also shown that the conservative-over-liberal advantage has been narrowing in recent years.

Americans' increasingly liberal views on social issues are apparent in trends showing that the public is exhibiting greater support for gay marriage, legalizing marijuana, and having a baby outside of marriage, and diminished support for the death penalty.

Democrats Increasingly Say Their Social and Economic Views Are Liberal

A solid majority of Republicans and Republican-leaning independents identify their social and economic attitudes as conservative. Democrats and Democratic-leaners show less consensus, with pluralities saying their social views are liberal and their economic views moderate.

@Her?: There's probably a good chance you didn't learn about the conservative policies that lead to economic depressions Wed, 24 June 2015 02:58 AM