What does it mean to be conservative? 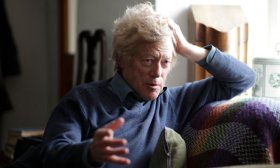 Some years ago, while canvassing for his wife in a local election in Wiltshire, Roger Scruton was asked on the doorstep, “What is conservatism, anyway?” The voter had unwittingly put the question to the man who, more than any other, has defined what conservatism is; the man who has as good a claim as any to be the cleverest living Englishman.

If he were on the Left, Roger Scruton would be recognised as one of our towering public intellectuals; but it’s a peculiarity of our age that conservative thinkers occupy a space beyond the mental horizons of most commissioning editors. There will always be Rightist columnists of the Richard Littlejohn variety, I’m delighted to say; but a Rightist professor whose writings range from German philosophy to the oddities of common law, from religious art to country sports, is likely to be regarded as an eccentric class traitor.

Still, Roger will be read and remembered when many of the prominent literary figures of our day are footnotes – partly for the keenness of his intelligence and partly for the consistency of his vision, but mainly for the grandeur of his prose. He can ennoble almost any subject – economics, cooking, telephone boxes – by his gentle logic and his courteous insistence on treating readers as his intellectual equals.

Roger’s detractors call him an unthinking man’s thinking man, alleging that he will justify any prejudice, from insistence on traditional marriage to dislike of immigration, with allusions to Herder or Aristotle. In fact, the good professor . Life, he holds, would become impossible if we had to think through every situation from first principles, disregarding both our own experience and the wisdom of our ancestors.

@Shaun Sharkey: People need to absolve themselves of the idea that Thatcher was a conservative. She, without meaning to, destroyed the preeminence of class. Fri, 26 June 2015 12:57 PM