The Economist explains itself 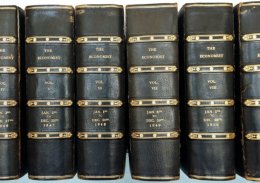 Editor’s note: This week, to mark the 170th anniversary of the appearance of the first issue of The Economist on September 2nd 1843, this blog will answer some of the more frequently asked questions about The Economist itself.

SOME readers, particularly those used to the left-right split in most democratic legislatures, are bamboozled by The Economist’s political stance. We like free enterprise and tend to favour deregulation and privatisation. But we also like gay marriage, want to legalise drugs and disapprove of monarchy. So is the newspaper right-wing or left-wing?

Neither, is the answer. The Economist was founded in 1843 by James Wilson, a British businessman who objected to heavy import duties on foreign corn. Mr Wilson and his friends in the Anti-Corn Law League were classical liberals in the tradition of Adam Smith and, later, the likes of John Stuart Mill and William Ewart Gladstone. This intellectual ancestry has guided the newspaper's instincts ever since: it opposes all undue curtailment of an individual’s economic or personal freedom. But like its founders, it is not dogmatic. Where there is a liberal case for government to do something, The Economist will air it. Early in its life, its writers were keen supporters of the income tax, for example. Since then it has backed causes like universal health care and gun control. But its starting point is that government should only remove power and wealth from individuals when it has an excellent reason to do so.

Clegg Warns Against Possible Coalitions on the Left or Right

Common Core: Common Enemy of the Right and the Left?

The History & Fallacy of the Right-Left Political Divide

Left or Right: Who Dominates the Blogosphere?

Violent Threats: Wrong on the Left or Right
Related Posts

@Jerome: #RacismInAmerica is not a #conservative or a #liberal problem. It is an #American issue both #Left & #Right need to take responsibility for. Mon, 22 June 2015 02:21 PM

@mundanematt I just wish people would drop this "left/right" or "liberal/conservative" or "black/white" bullshit lol. Mon, 22 June 2015 06:20 AM