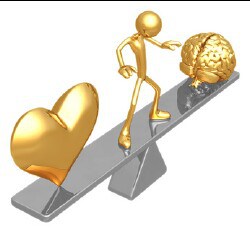 Because men and women are biologically different they think differently. Women think emotionally first, logically second, while men are the opposite. The best example of this is; men think digitally on a twenty-four hour clock, while women think in analog on a twelve hour clock, and women expect men to know if it is noon or midnight without checking if the sun is up.

Thinking emotionally is why girls mature faster socially then boys, but why boys are more scientifically inclined than women. It’s why women understand people better, while men understand things. It’s also why women seem to think men can read their minds because they expect men to come to the same conclusions as themselves.

Though the thinking processes of men and women are different due to biology, the difference between liberals and conservatives is due to emotional maturity. An emotional youth is quick to anger and angry people think irrationally. When it comes to politics, people who think emotionally do not think rationally.

Irrational people jump to conclusions without considering all of the facts. Nowhere is this more than case than in the debate over climate change. But it is also a factor in every argument between intemperate youths, as well as angry old people, and seasoned adults.

Emotionally driven youths are more likely to listen to emotionally driven adults before the listen to reason. Those that learn to see the difference eventually become conservative in their thinking. Those that do not will remain liberally irrational their entire lives, which is what enables those who prey on their emotions to perpetually fool them.

This also explains why the idea of socialism being fair appeals to the young who do not understand how the world works. They have yet to learn the morality of right and wrong being different from good and bad. The reason the concept of fairness seems right is because they do not take into account the degree of greed and envy, laziness and deceit that is in every human heart.

This is why learning the Ten Commandments and the Seven Deadly Sins, of which these are a part, is so important in beginning the moral instruction of our children. This is why teaching them the meaning Christ’s Word of doing for others is paramount before they are taught corruption to do only for themselves. And this is why the Church, while separate from the State, must be the guiding force behind those who are elected to run the government; that they serve rather than rule.

The Good (Conservative) Wife vs The Neurotic (Liberal ...

Mike Huckabee vs. the Women of Fox

Conservative Women vs. Liberal Men Who is Tougher?