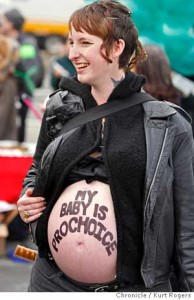 If you are a Liberal, you believe that a woman has the right to decide what happens with her body. A fetus is not a human life, so it does not have separate individual rights.

If you are a Liberal, you also want to tell people how and what to eat. Michelle Obama’s mission since her husband took office is to ban the use of certain foods that people enjoy. Such as trans fats and limit the use of sugar, and much more. This doesn’t make sense, because if a Liberal woman’s argument in support of abortion is that no one gets to tell her what to do with her body, why then do they want to ban foods, regulate school lunches and force restaurants to serve certain kinds of foods and leave certain ingredients, such as salt or sugar off their tables? Are they not limiting an individual’s freedoms and own right to choose? Conservatives believe in educating people with correct information regarding certain poor eating habits and let the people choose for themselves. 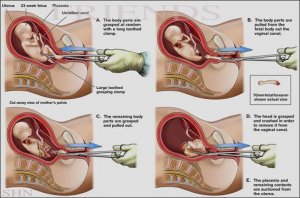 The idea of supporting a woman’s right to choose is simple, and is not based on facts for more than 90% of abortions. The truth behind a majority of abortions is simple: having a baby at that particular time, with that particular person, be it a husband, boyfriend or lover, is inconvenient. Yet somehow Liberals get away with bogus arguments and unproven statistics about rape, health etc while standing firmly on the idea that they have the right to do what they want with their bodies yet all the while they are telling everyone else what to do with THEIR bodies! They are out to ban football next because of concussions. Many people think Liberalism should be banned because it seems they all have experienced some type of brain impairment.

Liberals believe that the government should provide taxpayer funded abortions for women who cannot afford them. They believe, as we pointed out above, that the decision to have an abortion is a personal choice of a woman regarding her own body and the government must protect this right.

Liberals believe women have the right to affordable, safe and legal abortions, including partial birth abortion. Somehow, the government will provide for this and pay for it and even FORCE religious institutions to pay for it and provide it despite their absolute moral position that it is murder. So Obama and Liberals today are forcing Religious institutions to go completely against their teachings and beliefs.

Conservative Thinks Abortion Will Be Outlawed In 20 Years

ABORTION, Why Christian Conservatives are Pro-life for the ...

@Cullin Arn: Conservatives are fine listening to the pope on abortion and encourage him to be involved, but God forbid he tell you to recycle. Sat, 20 June 2015 09:31 PM

RT @Cheeeeeeeze: Conservatives: "You can't listen to the Pope on climate change! You can only listen to him on things we agree on like abor… Sun, 21 June 2015 10:23 PM