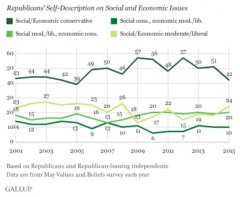 As the Gallup data indicates:

With the American population aging rapidly, demography is therefore in favor of the social and economic conservatives, particularly if a GOP candidate can motivate the older demographics to become more involved in the primary process and, ultimately, the general election.

Voting rates do increase with age, but they reach a plateau of about 70 percent for those over 50 years old. One third of the U.S. population is currently in the 50+ age bracket, meaning that socially and economically conservative Republican candidates who can mobilize even a small increase in the 50+ voter turnout rate could prove decisive.

The latest polling data from Gallup shows that while the percentage of Republicans and Republican-leaning independents who describe themselves as social and economic conservatives has shrunk in recent years, this group still dominates the party.

The current percentage of social+economic conservatives in the GOP is 42 percent, down from 57 percent in 2012, and back into a range last seen during the first five years of the George W. Bush presidency.