Political ideology is more than just “liberal” and “conservative” 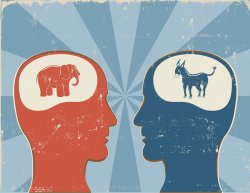 Liberals and conservatives aren't all they're cracked up to beIn this blog post, I describe new evidence that thinking about political ideology on a single liberal/left to conservative/right spectrum masks important nuances in the origins of political ideologies and in the way that people apply those ideologies to important judgments, including those of other people (i.e., prejudice).

Both the popular media and social scientists themselves often divide the political world into two sets of actors: liberals and conservatives. And indeed, this distinction between liberals and conservatives has important implications—people sort themselves into different ideological camps based on these identities (Motyl et al., 2014). Knowing how liberal or conservative someone considers themselves indeed gives us a very good estimate of which party’s candidate they will vote for in a Presidential election (Jost, 2006). Moreover, many of our most influential psychological theories of ideology are predicated on this uni-dimensional left-to-right continuum (e.g., the motivated social cognition framework; Jost, Glaser, Kruglanski, & Sulloway, 2003).

That said, some recent evidence indicates that there are at least two dimensions to ideological beliefs: one encompassing social issues and policy (e.g., marriage equality and abortion rights), and another encompassing economic issues and policy (e.g., taxation and government intervention into markets). These different dimensions of ideology typically go hand in hand with one another (e.g., people who are socially conservative are typically economically conservative). However, there are also important differences between these two dimensions not only in the psychological predispositions associated with them, but also in their consequences for policy and intergroup attitudes. The importance of an understanding of ideology that includes multiple dimensions is illustrated in the case of libertarians, who are typically considered somewhat liberal on social issues but conservative on economic issues. In their examination of American libertarians, Iyer, Koleva, Graham, Ditto, and Haidt (2012) find that compared to both liberals and conservatives, libertarians more strongly endorse individual liberty compared to other moral principles, possess a more cerebral than emotional cognitive style, and are lower in social relatedness.

Liberals vs Conservatives. Who Is More Emotional?