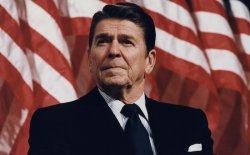 Well-known liberal Ronald Reagan, before his ignominious ouster from the GOP.

Given how easily conservatives ignore the teachings of Jesus when pretending to be real Christians, it should come as no surprise that Conservative Hero Zombie Reagan is nothing like the real Reagan. As I wrote in American Taliban: The funny thing is, Reagan was a flaming liberal compared to today’s American Taliban members and their views. In the conservative canon, Reagan was a heroic tax cutter and fiscal hawk, brought the Soviet Union down with his steely resolve and soaring rhetoric (“Mr. Gorbachev, tear down this wall!”), and made America proud of itself again. Reagan’s record, though, was a bit different. He certainly passed massive tax cuts his first year in office, but then reversed many of them when he signed into law the Tax Equity and Fiscal Responsibility Act of 1982 (TEFRA). Former Reagan advisor Bruce Bartlett wrote in 2003 that “according to a recent Treasury Department study, TEFRA alone raised taxes by almost 1 percent of the gross domestic product, making it the largest peacetime tax increase in American history.” Moreover, Reagan also backed a $3.3 billion gasoline tax and increased the Social Security tax rate. Sure, the Soviet Union fell soon after his presidency ended, but Reagan met and negotiated with Gorbachev – the head of the “evil empire” as Reagan himself labeled the Soviet Union. As for his reputation as a fiscal hawk, it would be laughable, were it not for the fact that Reagan began the steep slide into deficit spending that inflicted long-term damage. And for a party that has worked tirelessly to destroy the civil rights of homosexuals, Reagan was a maverick in his strident opposition to the Briggs Initiative in California, which would’ve banned gays and lesbians from teaching in the public schools, and his opposition helped defeat the measure. Lastly, let’s not forget that Reagan granted amnesty to millions of illegal aliens in 1986, a position antithetical to current American Taliban ideology.

Any Republican today talking or governing like Ronald Reagan would earn a swift kick out of their party, labeled as a tax-raising, terrorist-negotiating, gay-loving, amnesty- granting, big spender. Yet that hasn’t stopped the American Taliban from elevating Reagan to sainthood, airbrushing out his more nuanced beliefs and actions. Republicans have been thrown to the curb for far less these days.

When you have Republicans like Rep. Duncan Hunter calling Reagan "a former liberal ... who would never be elected today, " or Mike Huckabbee noting the obvious that "Ronald Reagan would have a very difficult, if not impossible, time being nominated in this atmosphere of the Republican Party, " you know something is wrong with today's GOP. As Steve Benen noted:

[S]houldn’t that tell the political world something about the radicalism of today’s GOP? What should Republicans take away from the fact that, by 2011 standards, their party would dismiss their demigod as a tax-raising, amnesty-loving, pro-bailout, cut-and-run, big-government Democrat?
Source: www.dailykos.com

@josh: I feel extremely liberal here dang. Ronald Reagan gets standing applause and Obama gets no applause and some boos. Wed, 24 June 2015 10:19 PM