The question is not just what the Supreme Court will say, but how it will say it. 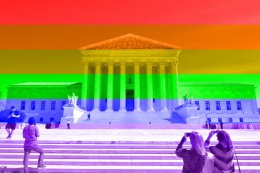 How the Supreme Court rules in an upcoming same-sex marriage case could affect other questions concerning LGBT rights.

The Supreme Court on Tuesday will hear arguments in a monumental same-sex marriage case that has arrived at the justices' doorstep faster than expected, but also was a long time coming. And while those on both sides of the debate are eager for the court to rule once and for all whether states must recognize gay and lesbian marriages, many also have an eye toward how such a ruling could affect battles over LGBT rights down the road.

The last time the high court weighed in on the right of gay and lesbian couples to marry, the justices issued one ruling striking down a portion of the federal law that permitted the U.S. government to deny gay couples marriage benefits, and another allowing same-sex marriage to become legal in California on a technicality. The decisions, both issued in June 2013, set into motion the toppling of same-sex marriage bans in states across the country; overwhelmingly, federal and state courts have ruled that state prohibitions on same-sex marriage are unconstitutional.

In November, however, the 6th U.S. Circuit Court of Appeals became the first federal appeals court since the Windsor decision to side with gay marriage opponents, upholding marriage restrictions in Kentucky, Michigan, Ohio, and Tennessee. The decision created what is known as a circuit split, which often prompts the Supreme Court to consider an issue, and in January the high court announced it would consider the four states’ restraints on same-sex marriage.

Same sex marriage to be heard at the Supreme Court

Same-sex marriage: How a wedding cake became a cause