Liberal VS Conservative VS Libertarian VS Authoritarian Table / Chart 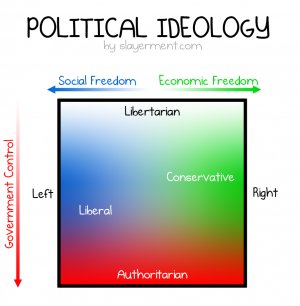 Or to put it more simply:

Let's take a look at some popular political issues:

Note: Keep in mind these are the general trends. There are still logical inconsistencies with some issues, moreso on the liberal side. For example liberals support personal freedom but are less likely to support the freedom for people to own personal firearms.

To gain a better understanding let's look at a few examples of issues between three ideologies.

Let's look at another one.