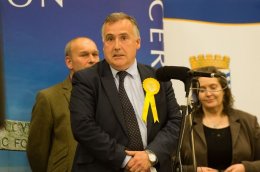 Liberal Democrats will return as a political force but first they must work hard, rediscover ideals and rebuild trust, according to the party’s sole remaining MP in Wales.

Ceredigion MP Mark Williams is just one of eight Lib Dems left in the Commons and is now deputy leader of the Welsh party.

He won the seat from Plaid Cymru in 2005 with a majority of just 219 and held onto the constituency in last month’s election by 3, 067 votes.

Mr Williams claims he “owed his victory” to the leadership of Charles Kennedy.

Speaking just hours after Mr Kennedy’s death was announced, he said: “He was a good friend to Wales... It is absolutely shattering. 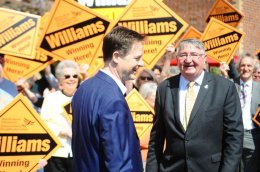 “The Lib Dems have lost a political giant. They really have.” 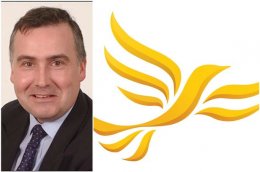 Mark Williams last month held Ceredigion for the Lib Dems with a majority of 3, 067

Mr Williams, a firm supporter of leadership contender Tim Farron, admits that parliament is now a “lonely place” but notes that this is not the first time his party has only had one Welsh MP. 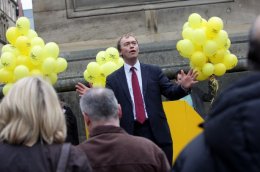 “It took time, it took a lot of hard work, to build up again, to get to the point where we had four MPs and we controlled all the cities in Wales in local government terms, and that’s the challenge again. Under Tim Farron’s leadership I’m sure we can get there again.

“But it has been a rather strange three weeks, it must be said.”

He added: “The loss I felt most personally was my great friend Roger Williams who we miss enormously.”

Mark Williams misses the company of Roger Williams (pictured to the right of Nick Clegg), who was Brecon and Radnorshire's MP from 2001 to 2015

Mr Williams was not a fan of the 2004 Orange Book – a collection of essays written by figures including Nick Clegg, Chris Huhne, Ed Davey and David Laws and Steve Webb – which was seen as pointing the party towards the right.

He said: “I’ve never subscribed to the Orange Book. I think that was an unfortunate direction that elements in the party took.

“Certainly from a Welsh perspective, people are looking for us to stand up for public services, to be outward looking in terms of Europe, to have the green agenda, to be unashamedly campaigning for home rule. They are the kind of ideas I think Charles Kennedy established for us – many of those ideas were taken forward, ironically, in the coalition Government thanks to Clegg as well.”

Mr Kennedy, he said, carved out a “distinctive, progressive, centre-left identity for the party”

He said: “The problem was the breach of trust... The trust thing really did matter.

“It mattered especially for Liberal Democrats [who] for years had been the nice guys of politics. Then, given this opportunity for power on very clear issues in the eyes of many we fluffed it completely.”

@Princesleah✨: I laugh at girls with "republican" in front of their username. Like lol. What happens when roles reverse and republican ideals are liberal? Sat, 27 June 2015 12:27 AM