Fifteen Definitions of Freedom from #OccupyWallStreet 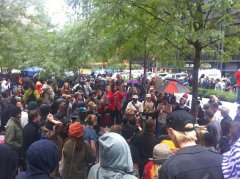 If you want to know what someone is thinking, ask them. And nothing quite cuts to the political chase more than asking someone what the word “freedom” means to them.

I decided to ask 15 random people at Occupy Wall Street in New York what the word “freedom” means to them. Here are their answers:

One: “Freedom is bound up with the idea of possibilities. The idea of limitless possibilities is the ideal of limitless freedom. The idea that anything is potentially possible, that’s what freedom means. And historically there have been very few people that have been allowed to have the kinds of possibilities that would allow them to be free. Society has progressed more and more people have been allowed to be free. But we still live in a state of unfreedom. Society does not live for its own sake, autonomously. It is still bound to something external to itself that structures it. The goal of history and transforming society must be to make these possibilities available to everyone.” 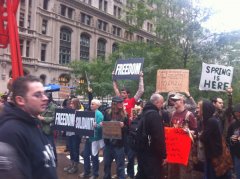 Four: “Being able to have enough activities, friends and the social basis of self-respect so that you can make meaning out of your life.”

Six: “Freedom means freedom from necessity, freedom to do what you want without having to sell yourself in order to survive. Freedom to express who you are through whatever you want to do without any forces stopping you.”

Seven: “Freedom is your ability to carry out what you want to do, but at the same time I feel that we are living in a fully interactive environment where we are effected by everything around us, which is also helping dictate what we do – by whatever forces, the weather, other people, anything. True freedom is a great fight but I think it isn’t fully possible.”

Nine: “Freedom means the unlimited transformability of all things humans into things beyond human. The unimaginable frontiers of human destiny that we have given up largely to our own discredit.”

What I think about same sex marriage

Flame On - 5 Facts on Same-Sex Marriage