Are these the most politically active schools in the US?

While listing UC Berkley as the most politically active, and Columbia as second are obvious choices, other schools seem to have been selected for the famous politicians and power moguls they produced, and not because of a history of student activism. American University and George Washington University were listed as third and fifth, but they are known for their graduates and internship opportunities rather than political actions on campus. Other places were included because of their alternative approach to education such as the New College of Florida.

While the list does include some schools that have a long history of political activism, Hampshire College, the first U.S. college campus to rally against apartheid in South Africa only appeared at number 12, and missing from the list is the politically progressive, and environmentally conscious school from the West Coast, Evergreen State College 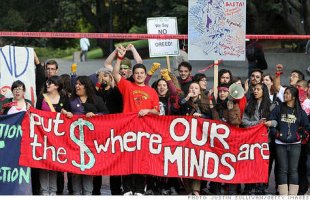