Thinking Like a Conservative (Part One): Mass Shootings and Gun Control | The Nation 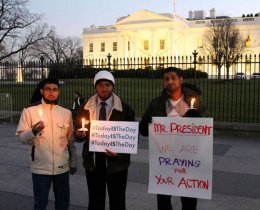 Attendees at a vigil for victims of the Sandy Hook school shooting in Newtown, Connecticut, plead for legislative action on gun control. (The Nation/George Zornick)

Allow me to remove this rhetorical club I keep in a sheath alongside my waist and beat some of my liberal friends with it, because I’m getting frustrated, frustrated, frustrated, and I can’t hardly take it no more. Despite a continuous flow of examples to the contrary this spring, summer and, now, autumn, our side keeps on wishfully, willfully and rather ignorantly denying the plain evidence in front of their faces about how conservative politics works. Namely, I keep seeing predictions that this, that or the other signal from polls or the political establishment or a traumatized public will “finally” “break the spell” of right-wing extremism on a certain issue, or even on all issues—and then we see that prediction spectacularly fail.

We can’t keep on going this way, my friend. You have to finally come to terms with how conservatism works. Now, that guy in the White House, Obama—I’ve given up hope that he’ll ever get it. I still have faith in you, though. Stop judging conservative by the logic of “normal” politics, or by the epistemology of the world as you, a liberal, understand it. Or as Poli Sci 101 understands it. Every time you do that, you denude us of strength for the fight. Grasp the right on its own terms. Stop trying to make it make sense on your own.

Here’s one example of what I mean. More tomorrow and Friday.

Consider the tragedy at Sandy Hook, the twenty dead children and six dead teachers and staffers, and the subsequent call for “common-sense” gun legislation that might ban assault weapons and extended magazine clips and strengthen background checks to keep guns out of the hands of criminals and the insane. Common sense for us, but for them? I remember a loved one asking me how many dead children it would take for conservatives to finally see reason on the subject—fifty children, 500, 5, 000 children? I reiterated my response to her when I appeared on Up With Steve Kornacki on MSNBC on Father’s Day, and Kornacki presented the heart-rending campaign of the anti-gun group NoFathersDay.org, which had volunteers send “Father’s Day” cards to members of Congress depicting families whose dads have been claimed by gun violence. Due respect to Kornacki and his outstanding production team, but when this was presented as a frightfully clever campaign to change the hearts of conservative legislators, I fingered my rhetorical beat-down stick. I explained my frustration thus (edited for continuity): “It’s really important to understand that Republican voters and Republican politicians are not necessarily persuadable on this issue by these kinds of arguments…. The mindset is completely different. I mean, a liberal looks at a card like this and says, ‘Isn’t it awful, these school shootings that keep on happenings? Let’s bring those to the forefront, because that helps us, and makes more people want gun control.’ But if you think like a conservative, and you think in terms of good people and evil people, the predominance of evil people makes you want less gun control, and more guns. And if the bad guys have a machine gun, you need a bazooka.”

Gun Control Explained by a Liberal

Why us Liberals will NEVER win gun control debate

Gun control How a US liberal learned to love guns

@JenniferMascia I'm a liberal who is not too keen on gun control cuz it wld probably only be enforced against blk ppl, like drug laws are. Fri, 26 June 2015 03:05 PM

RT @javiertionloc: Next liberal battle that America must address: gun ownership and control. Too many lives have been lost to careless poli… Fri, 26 June 2015 03:00 PM