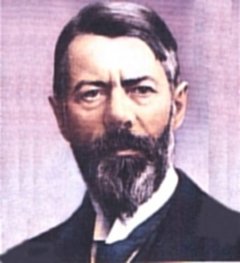 Max Weber was one of the greatest social scientists there has been, in a group which includes Weber, Adam Smith, Montesquieu, and very few others. He is normally regarded as one the three ‘Classical’ sociologists who instituted the discipline. Weber was born in Erfurt, Germany and pursued an academic career in Germany, with a period in the United States, and a longer period in Austria. He also had periods as an indepedent scholar and in public service.

Weber early on leaned towards nationalist conservatism, though he was certainly never an extreme nationalist by the standards of the time. Over time he moved to a liberalism strongly against socialism and conservatism. Some define his thought to the end as ‘nationalist’. It seems to me that his end point is a mixture of civic patriotism, in values, along with realism about the role of interests, and competitiveness, in international politics, as in all forms of politics.

His academic work began with a mixture of historical work in law and economics. From these starting points he moved into a vast synthesising enterprise, using a deep knowledge of the history of Europe in all its aspects, and knowledge of civilisations outside Europe. He also did more detailed work on aspects of the German society and economy of his time. The greatest product was the 1, 000 page masterpiece Economy and Society, along with many other shorter works.

Weber’s interest in economics was as defined by the ‘Historical School’ in Germany, which was interested in historical comparisons of a kind that put differences between societies above general laws in economics. However, time he spent as a professor in Vienna led him into a warm friendship with Ludwig von Mises, one of the great figures in liberal economics, and an advocate of economics as a science of universal laws. If Weber had lived longer, there might have been some fascinating collaboration. In any case, they certainly influenced each other, and it would be a fascinating though exhausting exercise to read Mises’ Human Action and Weber’s Economy and Society together.

Overall though, Weber was closer in thinking to Joseph Schumpter than Mises, amongst the ‘Austrian’ economists. That is Weber was less inclined that Mises to shrink the state to almost nothing, beyond national security and its law and order functions.

He explores the nature of the state in the longest piece in Political Writings, ‘Parliament and Government in Germany under a New Order’. This looks at the dysfunctions of the semi-democratic German Empire of 1871-1918, which gave real power to the Emperor and the north-eastern ‘Prussian Junker’ landowning families, who dominated the army and state bureaucracy. Weber argues that this system was increasingly dysfunctional and that the effectiveness of the state can only be guaranteed, and limited, in the right ways, by democracy, that is from responsibility to a national electorate.

The state needs some central authority to maintain institutions and security, but there must be decentralisation and separation of powers. Otherwise the state becomes a tool of the person in power, and of a social class that shares the interests of that person, leading to a mixture of authoritarianism and ineffectiveness.

RT @SMEAllianceLtd: @RBSlielikeadog Just a thought, How many political parties do we have now? What's happening to Labour & Liberal with no… Sat, 20 June 2015 08:35 PM

@GrnEyedMandy @_sirtainly correct an anarchist, a liberal political thought.. Not a conservative creed, not a tradition to secure, freedom. Sat, 20 June 2015 02:32 PM