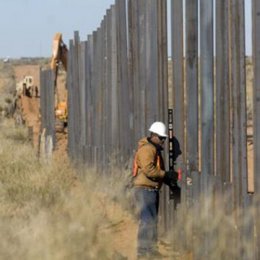 My colleague Andrea Nill notes that this is a fairly costly endeavor:

U.S. government investigators have indicated that it will cost taxpayers $6.5 billion over the next 20 years to maintain the fencing already in place and the Congressional Research Service estimated in 2007 that building and maintaining a double set of steel fences along 700 miles of the U.S.-Mexico border would add up to $49 billion over the expected 25-year life span of the fence.

That’s a lot of money to spend on an enterprise that, if successful, would reduce GDP and lower wages for most native-born Americans.

There's a general tendency among people of all ideological stripes to adopt a can't-do posture toward activities they just don't want the government to do. And some things are genuinely difficult for governments to do. Building a border wall isn't one of them. $49 billion over 25 years, or $2 billion a year, isn't that costly.

Yglesias argues that illegal immigration helps America's economy. But maintaining lax borders isn't really a good solution to immigration policy. If we want more immigration than the law allows - and I think we should - then we should raise the legal amount of immigration. Letting people in on the basis of their willingness and ability to evade border guards is not a rational approach. Yglesias argues:

Beck and Liddy, by contrast, are talking about a wall to keep out Mexicans who want to reach voluntary agreements to perform work in exchange for money. It’s about the least-nefarious plot of all time.

Mr.L: Obama Calls Blacks "a Mongrel People" on the View ...

Immigration Attry To Sen. Pearce: Why Don’t You Put Your ...

@souththaiexpat: has your view on immigration changed much since living abroad... i'm much more liberal on the whole immigration issue than before #expat Mon, 22 June 2015 11:42 AM