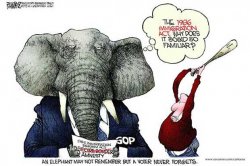 Not everyone in America who is skeptical of the immigration reform bill that the U.S. Senate passed last month is an uneducated bigot – but that's what the mainstream media would like you to believe.

Coverage of the legislation since mid-April, when the Senate introduced the sweeping overhaul, has been unequivocally biased to favor the liberal point of view. The Washington Post and New York Times have been the worst offenders. As these two papers are widely considered the gold standard in elite journalism circles, what they write influences what's covered and how it's covered on nightly network news, cable shows and in smaller regional papers around the country. They're true opinion-makers, and they're letting the American public down.

Of the more than 200 news articles and blogs the Washington Post wrote on immigration reform since the bill was introduced, pro-immigration stories more than doubled critical ones, and the number of articles that described how the Republican Party is fractured, inept and trying to lampoon the legislation nearly rivaled the daily news about the bill's changing content.

Of the dozen editorials the Post penned, none were compassionate toward the conservative opposition's viewpoint – instead the paper called them out for being "alarmist" and "mischievous" for not supporting what is so obviously a "moral" and "common sense" law.

The New York Times' so-called balanced coverage hasn't been any better. One of its columnists, David Brooks, took to the television airwaves this past weekend to call the case against immigration reform "intellectually weak."

How can the American public be informed, let alone decide how they feel about immigration reform, if they only hear one side of the story? Are opponents of the bill really outside of the American mainstream like the New York Times argued in its editorial last month? Should the U.S. public just accept the law, as the Post and the Times claim, because some action, however imperfect, is better than no action at all? Is it true that if the Republican Party doesn't accept the reform, its not ready to "modernize and grow, " but is clinging to outdated and unpopular principles, as the Post cited in its feature on immigration antagonist, Alabama Senator Jeff Sessions?

There are some real areas of concern in the legislation which have not yet been addressed by the media. The Senate's immigration bill represents the most sweeping overhaul of immigration law in nearly three decades – such a vast reform needs to be vetted from all sides. Skepticism should be welcomed, not dismissed. The process should take time and not be rushed.

This is what most American's consider common sense. The majority of those cynical of immigration reform have no desire to create an environment of "hostility and fear" for Latinos and Asians, as the Times put it, but just want to get the process right.

Exodus: immigration and multiculturalism in the 21st century

PSSSSTTT, "IMMIGRATION" IS A KEY WORD FOR "INVASION", BUT ...

Immigration: The Death of America

RT @ToryTottyOnline: My God - these lefty liberal views on immigration got us into this mess in the first place! #bbcqt Fri, 26 June 2015 11:10 AM