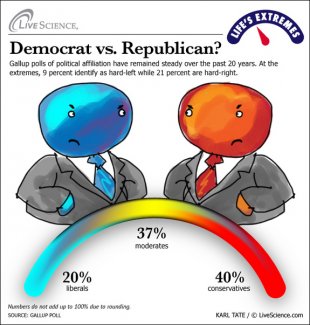 In this weekly series, LiveScience examines the psychology and sociology of opposite human behavior and personality types.

The red meat is flying in the Republican presidential nomination battle, which sees its first caucus-goer and voter results early next month. Given the United States' starkly divided political climate, one might think it obvious that fundamental, built-in differences exist between Democrats and Republicans.

Yet ideology stems from more than a slightly oversized or under-functioning brain region, researchers say. One's upbringing and experiences matter a great deal in forming political identities, which after all can change over a lifetime, or even a single election season. [People Become More Liberal With Age]

But some individuals do become quite fixed in their political opinions. Such partisanship might speak to an underlying biological bent to worldviews that events and experience cannot undo.

"Generally people who tend to be moderate can go from one side to another, but I don't know of any extreme left-winger that became a right-winger, " said Marco Iacoboni, professor of psychiatry and biobehavioral science at the University of California Los Angeles.

Ideology, by the numbers

In terms of the percentage of the United States' population that identifies itself as liberal, moderate or conservative, the numbers have held relatively steady over the last 20 years, according to Gallup.

The percentage of Democrats, Moderates and Republicans has remained relatively steady over the past two decades.
Credit: Karl Tate, LiveScience Infographic Artist

Liberals have remained in the vicinity of 20 percent, moderates, around 37 percent and conservatives a shade higher around 40 percent, since the early 1990s.

At the extremes, those who identify themselves nowadays as hard-left Democrats stands at 9 percent compared with 21 percent who are hard-right Republicans.

A blue or red brain?

Researchers have long wondered if some people can't help but be an extreme left-winger or right-winger, based on innate biology. To an extent, studies of the brains of self-identified liberals and conservatives have yielded some consistent trends, Schreiber said.

Two of these trends are that liberals tend to have more activity in parts of the brain known as the insula and anterior cingulate cortex. Among other functions, the two regions overlap to an extent by dealing with cognitive conflict, in the insula's case, while the anterior cingulate cortex helps in processing conflicting information. [10 Things You Didn't Know About the Brain]

PJTV: ZoNation: Liberals and Democrats Are Racist, Not ...

Liberal vs. Conservative (Fear factor: The science behind ...

Orange Bookers vs Social Democrats: What does the future ...

Democrats vs. Republicans: Two Sides of the Political Debate

@daryl: I applaud the democrats efforts to remove the confederate flag. I only wish they would do the same for the rest of their failed inventions. Tue, 23 June 2015 06:53 AM