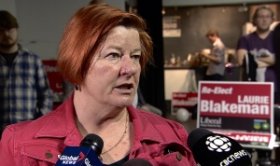 A long-time Alberta Liberal organizer admits the party has hit its lowest point after winning only four per cent of the vote and electing only one candidate to the legislature.

"We, at this point, have hit rock bottom, " said Karen Sevcik, who ran for the Liberals in Edmonton-Glenora. "The base we are at right now are our core supporters."

The party lacks a party president and a permanent leader. They were only able to run candidates in 56 of 87 ridings. Of the five Liberals elected in 2012, only two stood for re-election.

The NDP sweep in Edmonton brought down Laurie Blakeman, who had been the Liberal MLA for Edmonton-Centre since 1997.

David Swann, the party's interim leader, was re-elected in Calgary-Mountain View. He will sit as the only Liberal in the legislature.

After the results became clear, Swann tried to be optimistic about the end of 44 years of Progressive Conservative governments.

"Alberta you have spoken, " he told cheering supporters in Calgary. "You voted for change and frankly it's about time."

Sadly for Swann, the change Albertans chose was the NDP. The Liberals were unable to take advantage of voter discontent, which frustrated Sevick while she was campaigning.

"I was disappointed that my party wasn't strong enough, or was able to show them we could do it too, " she said. "It was hard to convince them because they saw the sea of orange signs that I had seen walking around their neighbourhoods."

The Liberal campaign was managed by Raj Sherman, who stepped down as party leader in January.

When asked about challenges he faced going into the campaign, Sherman admitted his own resignation was one of them. At the time, he expected the election wouldn't take place until 2016.

Laurie Blakeman lost the seat she held for 18 years in Edmonton Centre. (CBC)

"I will take full — I don't know if I should use the word — blame or credit, " he said before thanking Swann for stepping up as interim leader.

Things weren't always so dire for the Liberals. In 1993, the party won 32 of 83 seats in the legislature. The PCs, led for the first time by Ralph Klein, won the remaining 51.

Why the Liberals Think They Can Win in Alberta