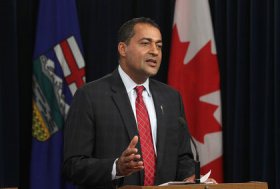 Alberta Liberal leader Raj Sherman says he is involved in a police investigation after authorities believe a man’s identity was stolen and used to leak documents during the PC leadership race that show Thomas Lukaszuk racked up a $20, 000 phone bill.

“I look forward to fully and honestly answering any and all questions Calgary police services may ask in order to bring their investigation to a successful close, ” said Sherman in a statement on the Alberta Liberal Party website.

Sherman was quick to say police are only interested in “what I may have heard or witnessed” and he is not being investigated for active involvement in the leak.

“Out of respect for Calgary police services, and to safeguard the integrity of the process ongoing investigation, I will make no further public comment on this matter at this time, ” Sherman said.

Calgary police are investigating an alleged fraudulent impersonation of a Calgary man whose identity was used to leak documents to the Edmonton Sun on August 25. The documents showed Lukaszuk accumulated $20, 243.91 in international data roaming charges on a trip to Poland and Israel, leaving tax payers to foot the bill.

Lukaszuk was quick to apologize for the expense, adding attempts to fight the charges with the cell phone company failed. He said the charges were related to a 2.29 gigabyte transfer of official documents related to legal matters which affected the government - statements backed up by documents from a law firm.

The information was leaked while Lukaszuk was running for leadership of the Alberta PC party — a race won by Jim Prentice on Saturday. Prentice and former cabinet minister Ron McIver have both denied any participation in the leak.

Sherman has called the alleged fraud “disturbing, ” and Lukaszuk said he has spoken with the man whose identity was used, noting he was quite fearful of the repercussions from the alleged fraud.