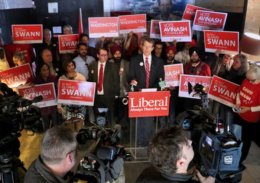 The announcement came on Tuesday when the Alberta Liberal party released its healthcare platform.

According to Swann, illness prevention would reduce hospital bed use as well as surgeries and a variety of future health complications.

The Liberals say if elected they would reduce administrative costs and prioritize front-line patient care resources.

As well, the Liberals would expand home care and long-term care and reform AHS management structure to ensure Alberta healthcare decisions are separate from politics.

The Liberals have already announced an aggressive vaccination program where all Alberta children must be vaccinated unless their parents or guardians sign a document acknowledging the risks of not vaccinating their child.

Under a Liberal government, families in need of in vitro fertilization would have reasonable and fair access to treatment.

The Liberals say their government would invest in mental health and addictions programs with early intervention, treatment, and rehabilitation.

Finally, hospitals, in particular the Misericaordia Hospital and Edmonton, along with other facilities would get expedited care to upgrade and modernize.

How will Liberals pay for health care?