Conservative Versus Liberal Matters on the Trans-Pacific Partnership 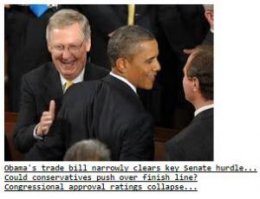 I don’t know why the most liberal president since Carter is such an opaque supporter of this policy. I don’t understand why he would go to Nike’s campus, of all places, and celebrate Nike’s commitment to add 10, 000 jobs to our economy why talking down to allies who understand how we are negotiating away our economic sovereignty.

But the point is, if we are to head in the right direction it is important to understand we need to work harder to spread the good word of liberalism to our friends on the other side of the aisle who still believe if we just continue to tear down regulations and hurdles to trade and a “free” market we’ll reach Ayn Rand‘s or Milton Friedman‘s economic utopia.

Life, markets, community, society, the globe is more complicated than that. Some of us get it, some would rather keep their heads buried in the sand. Here are a couple of articles from either side of the TPP divide. Paul Krugman of the NYT and a joint article from Congressman Paul Ryan (and 2012 Republican VP Candidate) and Presidential hopeful and Senator Ted Cruz. Both are behind paywalls, but there has to be ways around them – I don’t know how to get around the WSJ one and have no interest. I subscribe to the NYT.

Officials have evaded the main concerns about the content of a potential deal; they’ve belittled and dismissed the critics; and they’ve made blithe assurances that turn out not to be true.

‘Fast track’ authority will give lawmakers more say over agreements that are vital for economic growth.

I know it’s tempting to throw in the towel and say it’s all Repulocrats or Democans, but it’s not. We have an institutionalized system of two poles, if you don’t like where we are headed and you can see through the Republican’s charade, there is only one choice – get involved and make the Democrats do the right thing. They can’t while 64% of white men across the nation reflexively vote for conservatives. It’s up to you, and you can make a difference.

RT @the_littletramp: I've always thought that liberalism is a little crazy and conservatism is a little mean. And I'd rather be crazy than … Wed, 24 June 2015 05:51 PM

@WendyBriese Well, he was in the theory realm, practice is always tricky. A lot was said about conservatism, liberalism, on and so on #OOC Wed, 24 June 2015 07:08 PM