Americans are more conservative than they have been in decades 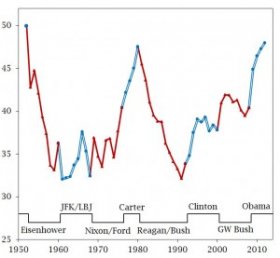 Stimson ’s book, Public Opinion in America: Moods, Cycles, and Swings, provides a detailed description and discussion of his approach. (Stimson tracks liberal policy mood, but I have reversed his index in order to highlight the striking current level of conservatism.) Measuring public opinion by tracking common trends in a wide variety of specific policy questions is a marked improvement over the more usual approach of simply asking people to identify themselves as conservatives or liberals. Many people don’t think in such abstract ideological terms, and even those who do sometimes use the conventional labels in unconventional ways.

Political pundits often suppose that presidential election outcomes reflect the current and future ideological mood of the country. For example, Obama’s election in 2008 was hailed as the advent of “The New Liberal Order” and cited as evidence that “liberal views have re-emerged with a vengeance.” His reelection in 2012 was even more improbably described as “the most decisive mandate for an assertive, progressive governing model in well over a generation.” In reality, Stimson’s data show, the public was already more conservative than usual in 2008, and a good deal more conservative by 2012.

The ups and downs in Stimson’s measure over the past 60 years suggest that partisan turnover in presidential elections is more often a cause of opinion change than a consequence of opinion change. The marked conservative shift under Democrat Barack Obama is by no means unusual; the country also moved sharply to the right under Bill Clinton (before the Republican takeover of Congress in 1994) and Jimmy Carter. Conversely, public opinion moved sharply to the left under Republican presidents Dwight Eisenhower and Ronald Reagan. Indeed, from the standpoint of public opinion, the “Reagan era” had already passed its high water mark by the time its namesake was inaugurated.

Dear Conservative Alternet Trolls: America is NOT a ...

A Conservative America on The VP Debate

@William Stephenson: Seeing the direction America is headed, we need a President who is strong in conservative and Christian beliefs. Mr. Tucker for President Sun, 28 June 2015 04:26 PM