Why Finland’s Educational Model Is More Conservative Than Ours 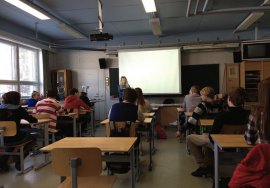 Advocates of education reform have pointed to Finland consistently over the past few years, urging the U.S. to take note of its educational success. The country has “consistently performed among the top nations on the Programme for International Student Assessment (PISA), ” writes Atlantic contributor Christine Gross-Loh, yet their system “break[s] a lot of the rules we take for granted.”

In her, Gross-Loh highlights many of Finland’s most successful policies, and contrasts them with U.S. education reform policy to great effect. Through the interview, several of Finland’s best educational measures (some with rather conservative values) stand out:

Encouraging the principle of subsidiarity

As part of a series of educational reforms in the 1970s and ’80s, Finland “shook the classrooms free from the last vestiges of top-down regulation, ” . “Control over policies shifted to town councils. The national curriculum was distilled into broad guidelines.”

Additionally, Finland has eliminated mandated standardized testing, with one exception: the National Matriculation Exam, which all students take at the end of upper-secondary school (similar to an American high school). “Instead, the public school system’s teachers are trained to assess children in classrooms using independent tests they create themselves, ” in December 2011. “All children receive a report card at the end of each semester, but these reports are based on individualized grading by each teacher.”

“There are no rankings, no comparisons or competition between students, schools or regions, ” writes Hancock. Because of this, Finnish educators are somewhat puzzled by the U.S. “fascination” with standardized testing—Louhivuori told Hancock such tests are “nonsense”: “We know much more about the children than these tests can tell us.”

Instead of requiring a state inspections, veteran teacher and principal Kari Louhivuori told Hancock, “Our incentives come from inside.” Teacher accountability and inspections are the responsibility of teachers and principals, not federal officials.

@kynatommy: i grew up in a conservative country plus i finished my education in a catholic school that's why i am telling this but i am celebrating this Fri, 26 June 2015 09:41 PM

RT @chadfelixg: Conservative Christians: realize that marriage is now like education. The left has taken over it. Only your private version… Fri, 26 June 2015 10:39 PM