Biological differences between conservatives and liberals 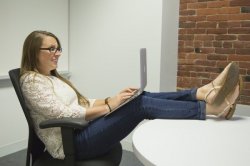 For many years, liberals have enjoyed the benefit of considering politics as a preference, meaning that political choices do not require a logical basis such as what is good for the nation, and reflect the whim and will of the individual alone. If you — for example — find liberalism to be aesthetically more inspiring, why not vote for that? Nothing wrong with it.

As always, time uncovers the hidden lie, and now science slowly reveals the gap between liberals and conservatives as having more of a biological (and thus aptitudinal, although they will fight that notion tooth and nail as they did with race, class and sex) foundation than previously thought. A recent study found that conservatives have a longer attention span and can postpone gratification for longer than liberals:

In a paper published Monday in Proceedings of the National Academy of Sciences, researchers say there is a link between political ideology and the ability to exert self-control.

In a series of three studies with more than 300 participants, the authors found that people who identify as conservative perform better on tests of self-control than those who identify as liberal regardless of race, socioeconomic status and gender.

Self-control includes the ability to defer gratification, which means that when the person looks forward to something pleasurable, they are able to put off acting toward that end in order to achieve a greater benefit. The classic example of this is the famous marshmallow test:

Conservatives, Liberals, and the Jimbo party

How Do Conservatives and Liberals See the World? Part 3

Why The Media Loves Conservatives And Hates Liberals

@Jake: Liberals and conservatives alike, U CANNOT USE THE OPINION OF SOME OTHER NOBODY AS EVIDENCE TO SUPPORT YOUR OPINION. IT DOESNT WORK THAT WAY Sun, 28 June 2015 04:29 PM