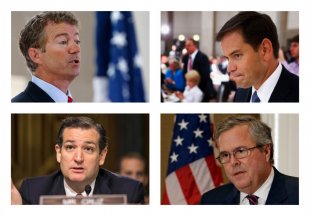 The heated rhetoric sounds like a campaign-style debate. And one of the reasons is that the stakes are high and the divide is growing. As we have written, the libertarian-style national security perspective espoused by Paul has been gaining steam in recent years - to the point that more hawkish figures like Christie - and Sens. John McCain (R-Ariz.) and Lindsey Graham (R-S.C.) - have felt the need to push back.

But what's most notable about the current debate is that there is really no favorite or underdog - only a jumbled mess. A vote in the House last week revealed as much. Ninety-four Republicans voted to restrict how the National Security Agency collects phone records (the Paul view), while 134 voted against it (the Christie view). That's a pretty even divide over an issue that just a few years ago would have produced near unanimity in GOP circles when the hawks dominated.

Even in the normally more cordial Senate, a schism has developed in the GOP Conference. The fight is over how best to combat Obamacare. A proposal backed by Sens. Mike Lee (R-Utah), Ted Cruz (R-Tex.), and Marco Rubio (R-Fla.) to reject any budget or continuing resolution measure that spends even a penny funding the health-care law has been derided - in no uncertain terms - by the likes of Sens. Tom Coburn (R-Okla.), Bob Corker (R-Tenn.), and Richard Burr (R-N.C.).

The fact that high-profile conservative senators (Corker is more moderate, but Coburn is a leading conservative, as is Burr) have staked out ground on both sides suggests, like the showdown in the House, that we're talking about more than a minor divide.

While Cruz and Rubio stand together in the fight to defund Obamacare, they held opposing viewpoints in the recently concluded Senate debate over immigration. In other words, allies vary from fight to fight and issue to issue, making it increasingly difficult to lump Republicans together.

Conservatives Are Still Blocking Gay Marriage In The South ...