From abortion to the drug war and gay marriage, decentralization is the only answer. 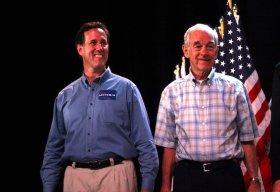 At the Conservative Political Action Conference last weekend, the nation’s largest annual gathering of conservatives, many speculated that the GOP might be veering in a more libertarian direction—or at least influential leaders within the party might be prodding it or might be anxious for it to go in that direction. The Daily Beast ran the headline “.” In his CPAC speech, former presidential candidate Rick Santorum warned that conservatives should not surrender their principles, referring specifically to social issues.

Part of the beauty of libertarianism is that you can be socially liberal or socially conservative and subscribe to the label. For the millions of social conservatives who constitute a significant base of the Republicans Party, embracing libertarianism is not an all-or-nothing question of accepting or rejecting deep convictions about life, traditional marriage, or drug regulation. It simply means rethinking the approach to these issues.

The distance between mere rhetoric and tangible success for social conservatives essentially comes down to this question: Does the federal government always have to become involved? Or should certain decisions be made at the state and local level, as the framers of the Constitution intended?

The protection of innocent life is the number one concern of millions of Americans in both parties. Most pro-lifers believe that Roe v. Wade was constitutionally unsound, and indeed, some pro-choice advocates even admit that the legal reasoning was flawed. Given the gravity of what’s at stake, it is understandable that many would demand federal protection of the unborn.

It is also true that the political prospects of this happening anytime soon are nil. But if murder and manslaughter laws are decided at the state and local level, why shouldn’t that approach work for those who believe abortion is the taking of an innocent human life? The more libertarian position is the constitutional one—that any powers not delegated to the federal government as outlined in Article 1, Section 8 of the Constitution are delegated to the states.

It might not be possible to get rid of abortion throughout the nation, but it might be possible to save unborn children in Alabama or South Carolina. National polls have shown that more Americans than ever are now calling themselves pro-life. Fighting at the local and state level to keep pushing attitudes in this direction is certainly a worthwhile effort.