The Conservative Case for Universal Coverage 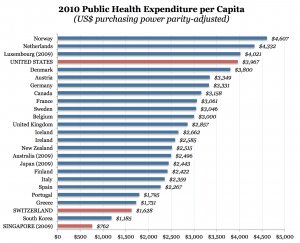 There’s been a lot of talk on the right about the importance of having a policy agenda that addresses the challenges of poverty and economic mobility. A neglected aspect of that discussion, however, is the degree to which access to health coverage is a part of the problem facing lower-income and middle-class Americans today. Medicaid is a basketcase of a program that leaves poor people no healthier than they were before — though it spends trillions on their behalf. And, thanks to Obamacare, one of the biggest economic challenges facing the middle class — the rising cost of health insurance — is getting significantly worse.

While “repealing and replacing” Obamacare is one way to address this problem, its political viability in 2017 — when tens of millions of Americans will be on Obamacare-sponsored coverage — is far from guaranteed. What will repealers-and-replacers say to Americans who like their Obamacare plans, and want to keep them?

The good news is there is an alternative approach, one that would achieve similar – if not better – fiscal results to repeal-and-replace, but with less disruption to existing coverage arrangements. I’ve discussed that approach previously in these pages, and I have a new article discussing the idea today in the Washington Examiner.

To summarize, it would nearly fully privatize Medicare and Medicaid; reform the employer-sponsored insurance market in a market-oriented direction; and deregulate Obamacare’s exchanges so that individuals could enjoy a broader choice of plans at lower cost.

To credibly advance this approach, conservatives must make one change to their stance: They have to agree that universal coverage is a morally worthy goal. No conservative politicians oppose universal public education; instead, we champion reforms that improve the quality of public education that poor Americans receive. Ensuring that every American has access to quality health coverage is a legitimate goal of public policy, and it can be done in a way that expands freedom and reduces the burden on American taxpayers.

Health Care Insurance is NOT A RIGHT - Part 1 of 2

Roadside Rally for Health Care Reform at the University of ...