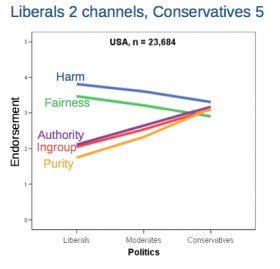 One of the criteria that Jonathan Haidt uses to identify Liberal vs. Conservative thinking is an openness to new experiences. This basic and seemingly innocuous indicator tracks well with certain political affiliations as they related to the five foundations of morality. Liberals as you may suspect are more open to new ideas and are therefore more willing to change. They are more likely to focus on the good things in change, hoping for the best. Conservatives tend to be reluctant to change, fearing that change may ruin the good things and bring more problems; unintended consequences. Such an outlook tends to track with age; younger people tend to be more liberal and older people tend to be more conservative.

While researching morality Haidt wondered if there existed a difference in how conservatives and liberals view morality. He created an interesting experiment to determine if there were moral differences between the two groups. He posted a questionnaire online which asked various questions relating to these five foundations of moral values ( Questions are first asked to determine your “openness to new experiences”, which determines your liberal or conservative slant. Then questions on five foundations of morality are asked.

The results of thousands of respondents in several countries provides clear evidence for a divergence of importance placed on these five foundations of morality. Liberals’ value – Harm/Care high, then Fairness/Reciprocity, then a big drop to Authority/Respect and In-group/Loyalty, then least Purity/Sanctity. Conservatives’ value – Harm/Care lower than liberals but place it at the top of their lists as well. Authority is a close second followed closely by In-group/Loyalty, and Purity/Sancitity, with Fairness/Reciprocity at the bottom.

my views on gay marriage

Clash of views on gay marriage at Supreme Court

@Aaron Livingston : Just about every liberal I've encountered that's my age is economically illiterate. Views on gay marriage and abortion won't save our count Sun, 21 June 2015 03:30 AM

@Bobbie Jean Thompson: Watched Kelly just to see her reaction and reporting to Supreme Court ruling on gay marriage. She did not disappoint in her liberal views. Sat, 27 June 2015 02:08 AM