Is Political Conservatism a Mild Form of Insanity? 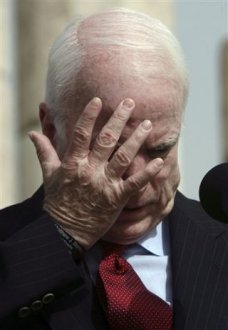 A few years ago I was standing on the deck of a beach house on the 4th of July and a person who had obviously drunk too much told me, “The secret of my life is that I always need someone to hate.”

I was reminded of this exchange while watching the stupendously ruthless Republican National Convention over the last several days. Is there anything that conservatives do not hate? Maybe drilling. In fact, they appear utterly phallically obsessed with drilling (a practice that, in about 10 years or so, might reduce gas prices by 2 or 3 cents per gallon). But otherwise, what we learned from the recent hatefest is that Republicans hate community organizers, liberals (surprise!), Madonna, the “east coast elite, ” the “angry left” media, trial lawyers, people who are too smart, people who are “cosmopolitan”—the list goes on into eternity.

Listening to this litany on Wednesday night in particular reminded me of a research article that came out roughly 5 years ago on political conservatism and motivated social cognition (Jost, Glaser, Kruglanski & Sulloway, “Political Conservatism as Motivated Social Cognition, ” Psychological Bulletin). In a nutshell, the article—by Stanford and UC Berkeley researchers—seems to suggest that conservatism is a mild form of insanity.

Here are the facts. A meta-analysis culled from 88 samples in 12 countries, and with an N of 22, 818, revealed that “several psychological variables predicted political conservatism.” Which variables exactly? In order of predictive power: Death anxiety, system instability, dogmatism/intolerance of ambiguity, closed-mindedness, low tolerance of uncertainty, high needs for order, structure, and closure, low integrative complexity, fear of threat and loss, and low self-esteem. The researchers conclude, a little chillingly, that “the core ideology of conservatism stresses resistance to change and a justification of inequality.”

The above list of variables is more than a little unsavory. We are talking about someone full of fear, with a poor sense of self, and a lack of mental dexterity. I always tell my students that tolerance of ambiguity is one especially excellent mark of psychological maturity. It isn’t a black and white world. According to the research, conservatives possess precisely the opposite: an intolerance of ambiguity and an inability to deal with complexity. Maybe that’s one reason why Obama seems so distasteful to them: he is a nuanced, multi-faceted thinker who can see things from several different perspectives simultaneously. And he isn’t preaching fear, either.

"Clinging to Guns and God": Political Conservatism in the ...

@NickNipclose @EscapeVelo Conservatism is still a modern political philosophy and believes in meddling where appropriate.Just less meddling Thu, 25 June 2015 09:08 AM

@Future Babylon: Donald Douglas: The political end of the Confederate Flag is the beginning of the final assault on American conservatism. Thu, 25 June 2015 07:43 AM