The hunger for knowledge had taken hold of him, and he began to read voraciously on all subjects. He determined to become a physician, and he learned to control the violent temper that still threatened his future. After graduating with honors from his high school, he attended Yale University, where he earned a degree in Psychology.

From Yale, he went to the Medical School of the University of Michigan, where his interest shifted from psychiatry to neurosurgery. His excellent hand-eye coordination and three-dimensional reasoning skills made him a superior surgeon. After medical school he became a neurosurgery resident at the world-famous Johns Hopkins Hospital in Baltimore. At age 32, he became the hospital's Director of Pediatric Neurosurgery, a position he would hold for the next 29 years.

In 1987, Carson made medical history with an operation to separate a pair of Siamese twins. The Binder twins were born joined at the back of the head. Operations to separate twins joined in this way had always failed, resulting in the death of one or both of the infants. 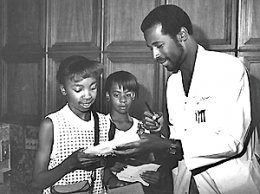 Carson agreed to undertake the operation. A 70-member surgical team, led by Dr. Carson, worked for 22 hours. At the end, the twins were successfully separated and can now survive independently.

Carson's other surgical innovations have included the first intra-uterine procedure to relieve pressure on the brain of a hydrocephalic fetal twin, and a hemispherectomy, in which an infant suffering from uncontrollable seizures has half of its brain removed. This stops the seizures, and the remaining half of the brain actually compensates for the missing hemisphere.

In addition to his medical practice, Dr. Carson has long been in constant demand as a public speaker, and devotes much of his time to meeting with groups of young people. In 2008, President George W. Bush awarded Dr. Carson the Presidential Medal of Freedom, the nation's highest civilian honor.

Dr. Carson's books include a memoir, Gifted Hands, and a motivational book, Think Big. Carson says the letters of "Think Big" stand for the following:

Talent: Our Creator has endowed all of us not just with the ability to sing, dance or throw a ball, but with intellectual talent. Start getting in touch with that part of you that is intellectual and develop that, and think of careers that will allow you to use that.

Insight: It comes from people who have already gone where you're trying to go. Learn from their triumphs and their mistakes.

Nice: If you're nice to people, then once they get over the suspicion of why you're being nice, they will be nice to you.

Knowledge: It makes you into a more valuable person. The more knowledge you have, the more people need you. It's an interesting phenomenon, but when people need you, they pay you, so you'll be okay in life.

Books: They are the mechanism for obtaining knowledge, as opposed to television.

Dr. Benjamin Carson: "I Would Be Willing to Debate Anyone ...

Dr. Benjamin Carson Says There Is a Possiblity He May Run ...

RT @RealBenCarson: I gave the commencement speech at Benjamin S. Carson High in Detroit, MI today! So proud of the outstanding scholars. ht… Sun, 21 June 2015 12:13 AM