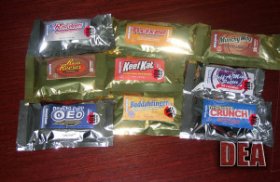 When I was a college student in the ’70s, marijuana-laced brownies were a novel way to get high (I never inhaled!). They are still a staple of some parties. Now a new generation of “food companies” is taking the concept of edible marijuana in a somewhat scary new direction: marijuana-laced foods that mimic popular candies. These sweets could pose a danger to children, warns a Perspective article in today’s

In the article, Robert J. MacCoun and Michelle M. Mello of Stanford Law School explore the promotion of edible marijuana, which can now be bought legally in four states — Colorado, Washington, Alaska, and Oregon — alongside the more traditional smoked form. As other states explore decriminalizing marijuana, the market for these products is likely to grow.

From a marketing perspective, it’s a cute concept to sell Buddahfingers that look like Butterfingers, Rasta Reese’s that mimic Reese’s Peanut Butter Cups, or Pot-Tarts that resemble Pop-Tarts. Adults would get the joke. But it’s no laughing matter for kids who accidentally eat the marijuana-based product thinking it’s candy.

To make matters worse, some of these products contain up to four times the “safe” dose of tetrahydrocannabinol (THC), the active ingredient in marijuana. Overdosing isn’t just a theoretical concern.

In Colorado, it’s been legal to buy and use medical marijuana since 2000. In 2014, the state became the first in the nation to okay the sale of marijuana for recreational use. But as Dr. Tista Ghosh and her colleagues from the Colorado Department of Public Health write in a separate New England Journal of Medicine article, there’s been an increase in emergency visits to Denver-area children’s hospitals because of kids accidentally eating edible marijuana products. And marijuana-related calls to the Rocky Mountain Poison and Drug Center have increased 70% since recreational marijuana got the green light.

Learn English Idioms: do you have Half-baked ideas?