What is the difference between how a “radical” or “progressive” economist and a “liberal” economist looks at things? 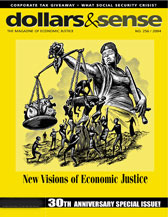 In the early 19th century, as capitalist industrialization transformed Western European society, both advocates and critics of the emerging social order discussed it in similar terms. To early commentators, society was divided into broad social classes—landlords, laborers, capitalists—defined by their power over economic resources. Analyzing this new capitalist system entailed understanding the creation and distribution of the social surplus—production beyond what was necessary to feed and house the workers—since this surplus provided rents and profits for the non-laboring classes.

By mid-century, thinkers like Karl Marx had turned this language into a powerful critique of capitalism. Marx argued that the politically disenfranchised working classes were victimized in industrial factories, the fruits of their labor stolen and transformed into profits with which the capitalist class created ever-more powerful tools of exploitation. Socialist, communist, and other radical movements demanded political and economic change, some calling for revolution and an end to private ownership of the means of production.

Partly in reaction to this, a very different language for talking about capitalist economies emerged by the turn of the 20th century. Called “neo-classical economics, ” it was quickly adopted by universities as the foundation for a new “economic science.” The neo-classicals jettisoned “classical” concerns with social class and control over resources. In their framework, society was simply a collection of self-interested individuals, all competing to maximize their own economic gains. The neo-classical world was a world devoid of history, politics, institutions, or any power, save for the coercive power of governments.

In this world, competitive markets were not the product of history, shaped by concrete political actions, but rather the natural form of economic organization and one to which all nations should aspire. In competitive markets, free individuals could work or reject work, buy or decline buying. Exploitation was ruled out by definition. If you work for $5 a day, that is your decision. You could just as easily choose to hold out for a higher wage or not to work at all.

Cenk Vs Economist On Liberal America