Liberals Can Define Themselves, Thank You 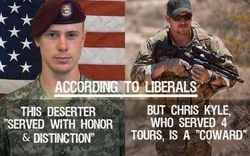 Today, as with any other day, I was bombarded by those fanatics in the Tea Party who are forever trolling on Twitter and ready to pounce with a ridiculous meme to put the rest of us in our place and define their preeminence over whatever issue they are on fire about at any given moment.

First today I was offered an opinion that, because I am a Liberal, I hate Chris Kyle, the soldier profiled in the recent movie American Sniper. As much as I genuinely love for people to consider my opinions, I would always much rather those opinions actually be defined by my points of view. I replied by sending a link to the blog entry I wrote in January (found here) where I went into detail about my support for not only the troops, but Chris Kyle, himself. I then went on to tell those fanatics that one of the many beautiful aspects of being a Liberal is the fact that I get to think for myself.

One of the necessary messages from the right about those of us on the left is that we hate soldiers. You will find there are many Liberals who support our troops. We hate war. We hate administrations who have no capacity or desire for diplomacy. But we do not all hate the troops. The distinction, however, is lost on them and their moral superiority would be quickly dashed if you reminded them that the food stamps they are rallying to cut are used by many military families and vets. Of course, you could always remind them that their elected leaders are the ones who block bills supporting the veterans. Repeatedly.

There is little that surprises me more when debating with someone in the Tea Party than when they post a meme of Dr. King stating he is a Republican to prove that they are not a racist. I always ask them to question the history of their party and explain to me why they think Dr. King was a Republican. And I ask them how they could possibly think that the man who wrote the Emancipation Proclamation could have been a Republican. It doesn't ever seem strange to them. It is as if they had never had a moments curiosity about it. Countless times I have had a discussion ended with the word "liar" and been blocked when I tell them that the parties switched over time and that it was Civil Rights, specifically, that completed it.

The gentleman I was discussing this image of Dr. King with also demanded that the left were racists. He had many other memes in his profile, as well, which were absolutely offensive. I was going to put one in this piece, but I couldn't bring myself to do it. Just know that during Ferguson he really enjoyed a depiction of the only place not being looted as a KFC and there was a rather upsetting depiction of a black child being compared to an ape in a tree.

Later this evening another fanatic who was ranting about the pizzeria in Indiana who stated they would not cater a gay wedding offered me some very clever information. He sent me a link to an online magazine whose name I will not offer because they are absolute garbage and I won't promote their nonsense. They are known for perpetuating hoaxes and hate and I refuse to have any part in that. The story, however, was about a young woman who donated to the fundraiser for the pizzeria who say they were forced to close their doors due to threats of violence from the gay community. Its always funny to me when, in their eyes, an entire community is accountable for the actions of a handful.

No gay marriage in Japan? PM Abe and conservative party ...

@gmbutts "The court did not define what a clear majority means, and left that definition to politicians" so liberals believe one thing and Thu, 25 June 2015 12:42 AM