Do Republicans support the death penalty

Gallup has asked Americans this question at least twice a year since 2001. To examine responses to this question more closely, Gallup combined the results of the nine surveys that asked this question from 2001 through 2004 on a year-by-year basis*. Overall, the data show that 67% of Americans supported the death penalty for convicted murderers in 2001. This percentage increased slightly to 71% in 2002, before dropping back to 67% in 2003. Results for this year show essentially no change since last year.

Americans who identify themselves as political conservatives are also more likely to support the death penalty than are moderates or liberals. Nearly three in four conservatives (74%) support capital punishment, compared with 68% of moderates and 54% of liberals. 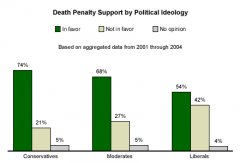 Men vs. Women on the Death Penalty

Do you support the death penalty?

What do National Healthcare and the Death Penalty Have in ...