New opportunities for the UK’s liberal-minded 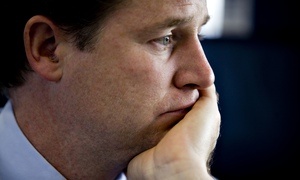 Many of us who voted Lib Dem in 2010 defected from Labour because of (among other things) Charlie Kennedy’s principled stance against the Iraq war and Nick Clegg’s promise that tuition fees would be scrapped. We also saw them as an honourable, decent party. We voted for a fairer, kinder government but ended up with the opposite of what we’d hoped for. The Liberal Democrats let us down badly.

The Lib Dems could come back as one element of a popular front, with Labour, Plaid Cymru and the Greens

• Your ) calls for a strengthened Liberal Democrat party. It fails to consider two other possibilities that may be more desirable, and perhaps more likely. 1) The Lib Dems could come back as one element of a “popular front”, an electoral pact with Labour, Plaid Cymru and the Greens in (say) 100 seats, designed to end the absurdity of illiberal majority Conservative government on a minority vote. 2) They could follow the path of their former sister party in Australia, the Democrats, who, in finding electoral oblivion, were replaced as the third party by the Greens, and have now ceased to exist altogether.
Rupert Read
2015 Green MP-candidate for Cambridge and former Lib Dem activist

• As a former Liberal party president who helped to bring about the alliance and then merger with the Social Democrats, I welcome Tim Farron’s suggestion that we return to the name “Liberal”. The description “Liberal Democrats” was created to meet a specific need at a specific time. Both the need and the time have passed. Now the need is to return to mature soil in which to nurture new growth.
Alan Watson
Liberal Democrat, House of Lords

• In 2004 The Orange Book: Reclaiming Liberalism was published. Generally regarded as one of the most economically liberal publications of recent times it stood as a challenge to the social liberalism that many who voted Lib Dem in 2010 assumed that the party stood for. Key contributors to this book included Clegg, Cable, Laws, Davey and Huhne, all of whom were to serve in the Cabinet as secretaries of state. It was also Laws that led the negotiating team.

Following the formation of the 2010 coalition government, the contributors to the book who were elected all ended up with ministerial posts. Susan Kramer, who lost her seat, was co-opted back in as a baroness so she could be given a ministerial position.

@Jason Dizon: It's so pointless to be conservative with an extreme liberal bias right outside your door. And yet they say they're open minded. Sun, 28 June 2015 04:32 PM