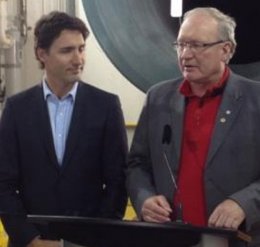 A recent poll shows the incumbent Liberals in Prince Edward Island, while still favoured to win, have seen their lead over the provincial Tories reduced significantly.

The province may be a microcosm of a wider federal trend taking place in Atlantic Canada.

The Corporate Research Associates poll, commissioned and published by The Guardian, showed a drop of 14 points for Wade MacLauchlan's Liberals compared to CRA's previous poll from February. The Progressive Conservative opposition saw its support rise significantly.

The gap between the parties shrank from 32 points to just nine. It makes for a tense final week, with the voting takes place on May 4.

The federal Liberals under leader Justin Trudeau are experiencing a similar softening in support in Atlantic Canada.

As recently as early March, the federal Liberal party held a very comfortable advantage over its rivals in the region. The party was polling at 52 per cent in ThreeHundredEight.com's March 2 projection, with the Conservatives at 23 per cent, the New Democrats at 17 per cent, and the Greens at 5.5 per cent.

That 29-point edge for the Liberals signaled a landslide victory. The party could have captured between 22 and 24 of the region's 32 seats with those levels of support. The Conservatives would have been reduced dramatically, with Peter MacKay potentially being the only Conservative outside of New Brunswick to survive the cull. For the New Democrats, only Jack Harris and Peter Stoffer looked like a lock for re-election.

But fortunes have changed in Atlantic Canada.

The Liberals are now averaging just 44.5 per cent support, their worst performance in the region in almost two years. The Conservatives, at 26 per cent, are putting up their best numbers since then. And the NDP, at 20 per cent, is at its highest level of support since last fall.

These estimates are based on an aggregate of polls stretching back several weeks, with newer surveys weighted more heavily. And those surveys are taking a negative turn for the Liberals.

Of the last five, the Liberals have registered just 42 to 44 per cent support. The last time the party put together numbers like that in five consecutive polls was before Trudeau became leader in 2013.