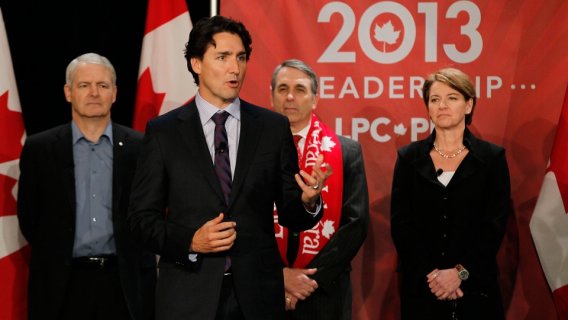 "I was raised on middle-class values and I'll work to strengthen the middle class, " he says. "Together we can bring change in Ottawa. I invite you to be part of it." The Toronto Star reports that the ads will start running on television Monday.

The Facebook video is captioned "Secrecy, unfairness, lack of transparency, disdain for the Charter – all in a day’s work for the Harper government. It’s time for #fairness."

It's based "in part" on a May 8 column by the National Post's Andrew Coyne, titled In the piece, Coyne summarizes the Conservative government's "busy day" on May 7, which included — among many other things — more Mike Duffy drama and a fundraising email from Pierre Poilievre that "scaled new heights of dishonesty, " as Coyne described it.

"Critics" being one Andrew Coyne.

The Liberals break down that day — with a delightful tune in the background — in their text-heavy ad, which you can watch below.