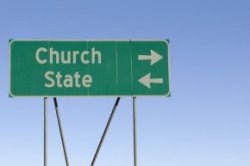 Typically, when people think of “religion and politics, ” they think of social issues such as abortion, contraceptives, and gay marriage. While that’s not a bad place to start, it does in fact start at the group level rather than focusing on individuals. Wanting instead to see how religion can affect political beliefs at the individual level, Ryan LaMothe (St. Meinrad School of Theology) found five ways in which this can happen.

More specifically, LaMothe investigates how religion can lead to political conversion and vice-versa on the individual level. As much as secular governments strive for a clean break between religion and politics, LaMothe argues that the two do in reality mix, and they mix in complex ways. On the political end, religion can strongly influence which party a person votes for, and even campaigns for, and on the religious end, political views can play a major role in religious conversion – in other words, people not uncommonly change religions or denominations in order to find a fit for their political beliefs.

LaMothe proposes five types of religious-political experience at the individual level. In the first type, religion has a “lingering influence” on a person’s political beliefs. This means that people early on in their life identified with a religion but later on converted out of it. Because they were part of a particular religion so early on in life, that religion’s symbols and narratives have been engrained in their mindset, even though they have since abandoned the tradition. In fact, political ideology may even replace a person’s religion. For example, a religious goal of loving one’s neighbor may translate into secular political activism such as fighting for the poor, and a political activist could dedicate his life to the poor in the same way a person might dedicate himself to a religion.

@daryl: I applaud the democrats efforts to remove the confederate flag. I only wish they would do the same for the rest of their failed inventions. Tue, 23 June 2015 06:53 AM