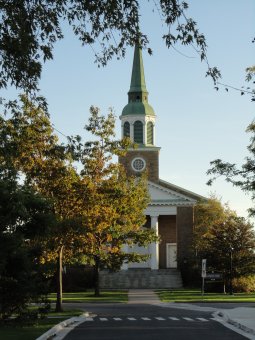 Stereotyping is a two-way street: as religious persons are often stereotyped for their beliefs, so anti-religious individuals are often stereotyped as having simplistic views. Those who genuinely believe there is conflict between religion and science may be seen as close-minded, particularly in an environment like StFX which is sympathetic to its Catholic roots. The norm in such environments, funnily enough, is to pay religion some small piece of homage, even if one is not a believer themselves.

It is increasingly popular to recognize that it is fundamentalist religion and science that truly come into conflict—the secular and the religious sigh in relief, having pushed the source of conflict onto the perceived out-group. Particularly in a University setting, there is a notion that the discussion need go no further: religious students tend to be more liberal, science-literate, and accepting of science. “At least I’m not one of those (a fundamentalist)” isn’t good enough, for the limbo of religious liberalism is sorely inconsistent and promotes false confidence in one’s beliefs.

It’s true that fundamentalist religion is far more an enemy to science and progress than its liberal counterpart (I polarize the two for the sake of argument). Fundamentalist swaths have opposed gay rights, the teaching of evolutionary theory in schools, and have taken hard-line views on abortion, to name a few. The unyielding, absolutist disposition of religious fundamentalism is of course incompatible with the values of secular democracy.

The seeming compromise, for many religious persons, is to adopt more liberal religious stances that marry well with the values and science of the modern West. This is likely an unconscious process: the individual is able to retain the best religion has to offer (not denying the sincerity of belief) without compromising the values and knowledge that the West has won with time (e.g., a negative view of slavery; equality for women, races, and sexualities; our evolutionary origins…all of which contradict Biblical views and accounts). The liberalization of religion has been so successful that the cognitive dissonance that ought to arise is no where to be found: the religious liberal avoids stubborn fundamentalism by watering down or denying the extreme views inherent to his/her faith.

The Abrahamic religions—Christianity (which I will speak to because I know it best), Judaism, Islam, so named for their common ancestral claims to Abraham of the Bible, Torah, or Koran, respectively, are fundamentalist religions in their original form. This speaks volumes. By our terminology, the first Christians and Christians for centuries qualify as “fundamentalists.” Religious liberalism? Quite the oxymoron.

"Godless? Liberalism and Religion: A Reply to Leo Strauss ...

Threats to Religious Liberty in Australia

RUSH: "If Liberalism Is A Religion, Abortion Is The Sacrament"

Between Rawls and religion: Liberalism in a Postsecular World

Hillary: All Religious Beliefs must be Changed to Liberalism
Related Posts

@Shaun Sharkey: People need to stop thinking in terms of left/right. The real battle is between liberalism and reactionaries, religious or otherwise. Tue, 23 June 2015 06:45 PM