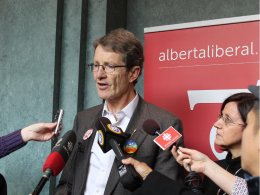 Interim Alberta Liberal leader David Swann says the timing is not right for a proposed merger with the Alberta Party, though he isn’t ruling out the idea of the two parties joining forces after an expected spring election.

The Calgary Mountain View MLA — Liberal leader from late 2008 to 2011 — assumed the post for a second time after being chosen by party directors on Sunday to replace outgoing leader Raj Sherman. The vote took place four years to the day after Swann announced his resignation of the leadership the first time around.

Swann — one of only two incumbent MLAs expected to run in the next provincial election — defeated Edmonton-Centre MLA Laurie Blakeman in the leadership vote. Blakeman had proposed herself as Liberal interim leader on the condition she pursue a merger with the Alberta Party, which has never elected anybody to the legislature but is also considered to be a progressive, centre-left party.

Party president Shelley Wark-Martyn would not reveal the breakdown of the vote, which occurred at a closed-door meeting in northeast Calgary, but said Swann was chosen by an “overwhelming majority.”

She said most Liberal party members are opposed to the idea of a merger, adding, “The energy in the room and the conversation in the room was overwhelmingly supportive of going forward as the Liberal Party of Alberta.”

Wark-Martyn also took a shot at the Alberta Party, saying it “has no policies.”

But Swann, who during his own time as leader tried to spark a unite-the-left movement that never managed to gain any traction, took a more conciliatory tone.

“All of us on the progressive side of politics in Alberta want to see more co-operation so that we don’t continue to split the vote so badly and again allow the PC party to take over Alberta, ” Swann said. “It’s very clear that there may be opportunities to talk, but it’s very late in the game for any kind of meaningful electoral co-operation.”

Justin Trudeau on future of Liberals in Alberta