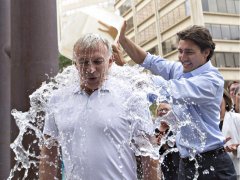 EDMONTON – Justin Trudeau’s Liberals are gearing up for a federal election as early as next spring and will eventually release a detailed, fully costed policy platform that focuses on economic insecurities facing Canadian middle-class families.

On Tuesday, most of the 37 Liberal MPs gathered for their annual summer retreat to discuss strategy for the coming months. In a sign of the political times, they also met with the party’s national board and its election-readiness committee.

According to the Conservative government’s fixed-date election law, Prime Minister Stephen Harper is to call an election for Oct. 19, 2015. But Liberals are preparing for the possibility that – as he did in 2008 – Harper will ignore that law and call an early election next spring so he can campaign on some tax-cut measures in the 2015 budget.

The Liberal party is working to get 338 candidates chosen by then and have a solid platform in place. (The House of Commons goes from 308 to 338 seats with the next election.)

Trudeau said it’s only “prudent” to prepare for an early call.

“We are on election alert at this point, ” said Toronto-area MP John McKay.

“The prime minister pulled a fast one last time and it’s not above him doing a fast one this time, ” he added. “He’s a very shrewd politician, and like most politicians he is into self-preservation. And if he thinks it’s advantageous to him to go early, he will.”

Montreal MP Marc Garneau said the party’s “biggest challenge” will be how it expands from 37 MPs to a full slate of candidates in just the next few months. “It’s a long and complex process to have 338 candidates by the next election. That’s our target and it’s a lot of work to get ready.”

But the Liberals, responding to accusations by Harper that they will run a campaign of vague policies, say they won’t be rushed into unveiling the specifics of their platform.

“Voters will have a fully and robust platform to vote on in the next election, ” said Trudeau. “An electoral platform gets put forward at election time.”

“In the meantime, we are building up a team of experts, of great candidates, listening to community leaders and ordinary Canadians who are expressing a level of anxiety about the future.”

Scott Brison, the party’s finance critic, also pledged that Canadians will learn the “details” of Liberal plans. “They will be fully costed. And there will be a fiscally responsible, sensible platform that will inform what a Trudeau government will do.”

Conservative Party of Canada Follies Episode #39: What if ...

@blessing receiver: everything the liberal media pushes on the public concerns incredibly niche issues, and they make bank off pretending to actually care Sun, 28 June 2015 07:18 PM