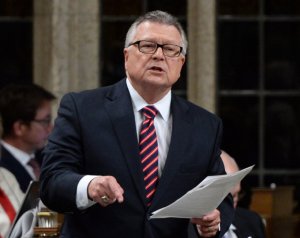 The federal NDP and Conservatives kicked off the new sitting of Parliament — and the unofficial start of the campaign for the 2015 election — with policy planks aimed at eating into Liberal leader Justin Trudeau’s first-place polling numbers.

But don’t expect the Grits to rush out a platform this fall just to combat the other parties’ intended narrative. Instead, anticipate more trial balloons, such as mandatory voting, floated last week.

“At the moment we’re working hard to do our homework to make sure that we get it right, ” deputy leader Ralph Goodale said in an interview.

There’s no timeline but they won’t be pushing anything out the door to counter criticisms he lacks the substance to lead the country.

There will also be more emails to supporters asking them to weigh in on ideas, like the one that brought mandatory voting to the fore. Expect to start hearing more from the party about fresh water protections, as Goodale cited broad consultation on how to best protect and maintain the quarter of the world’s fresh water that sits in Canada.

NDP leader Thomas Mulcair has made much of his party’s plans to raise the federal minimum wage to $15, create a national child care strategy based on Quebec’s now-floundering $7-a-day model and bring provincial health transfers back up to six per cent per year.

Prime Minister Stephen Harper and Finance Minister Joe Oliver have kicked off the run to 2015 with a promise to reduce Employment Insurance payroll taxes on small businesses to spur employment.

Mulcair, in particular, has earned much ink from the Ottawa press gallery over intention to use policy to push back the Liberals who, though they hold only 37 seats and are the third party in the House, are leading in the polls.

But despite that talk, the New Democrats haven’t released costing details or plans to fund their policy proposals. And Goodale suggested both other parties are only now pumping potential platform planks because the negative and personal attacks on Trudeau haven’t helped them in the polls.

And though the Grits aren’t rushing to release their costed platform, they’re also carefully preparing for the impending scrutiny.

It’s not just trial balloons, but also pruning ideas from last February’s policy convention, weekly Monday caucus meetings about policy in addition to the regular Wednesday gatherings, and expert councils on foreign affairs and the economy. The party knows its leader requires strong policy cred to turn the polls into seats, it’s just not yet ready to tip its hand.

Goodale hinted where the party is headed and said the Liberal platform, whenever it lands, will include a definition of the middle class — something Trudeau has been repeatedly challenged over.

“There will be a very practical, real-life definition of how Canadians themselves describe themselves in that category. It will be clear from the nature of the proposals that are being made, ” Goodale said.

And, he said the party will make clear where it stands on carbon pricing and resource development. Both are issues Trudeau has been challenged on or being too vague about.

RMR: A Message from the Liberal Party