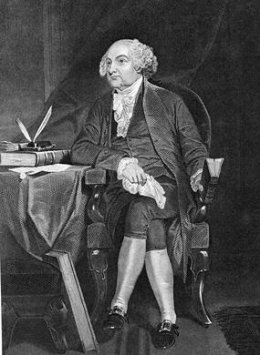 The sharply delineated views of America’s first two political parties, the Federalists and the Democratic-Republicans, would shape the politics of the country for decades to come. The Federalist Party was formed around 1787 after Alexander Hamilton, John Jay and James Madison wrote the Federalist Papers, a series of essays calling for a strong federal government which had a central bank, a standing army and tax laws.

President George Washington adopted Federalist views, as did John Adams, America’s second president. However, the Federalists were opposed by the Democratic-Republicans (sometimes simply called the Republicans) led by Thomas Jefferson, who felt that the Federalist view gave the government too much power over the states and also favored a narrow slice of New England mercantile interests over the rest of the country. Jefferson and the Democratic-Republicans believed in an agrarian society where most of the power resided with the states and their citizens.

The two parties saw their first major clash in the election of 1796, when Vice-President Adams ran for president against Secretary of State Thomas Jefferson. Federalists attacked Jefferson as an atheist, a supporter of the anarchic (in the Federalist view) French Revolution, while Jefferson’s Republicans assailed Adams as a monarchist, someone who might even restore royalist rule in the United States. Adams won by a slim margin, with Jefferson becoming his vice-president. But Jefferson’s vice-presidential post did nothing to keep him from continuing to attack the Federalist Party, whose rule he called in 1798 “a reign of witches.”

The Pivotal Election of 1800

The election of 1800, a rematch between Adams and Jefferson, saw Federalist vs. Democratic-Republican factionalism at its most vicious. Each party felt that the other was out to destroy America and subvert the Constitution. Accusations against Adams again centered on his supposed royalist leanings and his support of the Alien and Sedition Act, which allowed anyone who criticized the president to be thrown in jail. Federalists claimed that Jefferson performed strange rites in his Monticello home and would unleash a French Revolution-like Reign of Terror on America. In the end, Jefferson became president, with Aaron Burr as his vice-president.

The Federalists would never again win a presidential election and would, within the next 20 years, disappear. Many of the party's seminal ideas – a strong federal government, a central bank, a standing army – remain integral features of America’s government today. But as the country moved westward, the party became defined as a northeastern political elite, out of touch with the newly democratized spirit that would result in the popular vote by 1828. The Democratic-Republicans would undergo a shift, morphing by the late 1820s into the populist party of Andrew Jackson, and later into today’s Democratic Party.

Babara VS Elisabeth: The View Gets Heated Over Sarah Palin

Stacey Dash on Being Republican The View
Related Posts