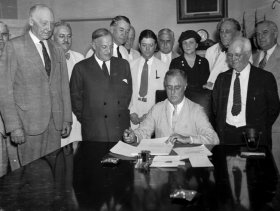 FDR began advocating for an old-age insurance program shortly after taking office in 1933. While the debate among Democrats largely centered on what form the program should take, whom it should cover and how it should be paid for, Republicans warned that the program would "impose a crushing burden on industry and labor" and "establish a bureaucracy in the field of insurance in competition with private business."

Republicans petitioned for the old-age insurance program - what became Social Security - to be struck from the House's bill entirely, leaving a much smaller version of welfare for the elderly. "Never in the history of the world has any measure been brought here so insidiously designed as to prevent business recovery, to enslave workers and to prevent any possibility of the employers providing work for the people, " Rep. John Taber (R-NY) said, arguing against the program.

In the Senate, Sen. Daniel Hastings (R-DE) also moved to strike the program from the legislation, warning that it would "end the progress of a great country and bring its people to the level of the average European."

Social Security still passed Congress and was signed by Roosevelt in 1935, though it did not cover nearly as many people or provide the same level of benefits as the program does today.

Despite the passage of Social Security, conservatives still believed that they could undo the new program. In the 1936 presidential campaign, Republican candidate Alf Landon, governor of Kansas, described Social Security as "a fraud on the workingman" and "a cruel hoax."

"The Republican party will have nothing to do with any plan that involves prying into the personal records of 26 million people, " Landon said in one address. The Republican National Committee sent out mailers campaigning against it.

But FDR trounced Landon, and the Roosevelt administration, his successor Truman, and Democrats in Congress started working on ways to expand the program toward its goal of universal coverage. When the disability program was up for debate in 1949, Republicans criticized it. They also petitioned against an increase in benefits, arguing that Social Security was intended to provide only a income floor for older Americans.

Social Security is not a Ponzi Scheme!