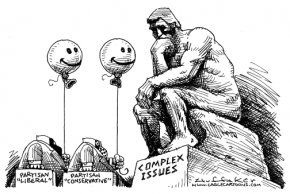 These two quotes together broadly describe one pillar of modern conservatism: a desire to maintain traditional structures and ideas, allowing minimal, if any, change. This attitude is contrasted with the one often seen in liberalism, which looks to advance structures and ideas based on progressing scientific knowledge and human reasoning. But I think these two quotes also highlight two misconceptions and miss the real point of contention in the debate over liberalism, conservatism, and tradition.

The first misconception is that conservatism has a rich tradition, while liberalism is a newer concept lacking a foundation. In fact, components of both can be traced back as far as the ancient Greek philosophers and Athenian democracy. However, in their current form both are relatively recent ideas. Modern conservatism is thought to have its roots in the 17th and 18th century, with figures like Irish politician Edmund Burke, who served in the British House of Commons. Modern liberalism has its origins in thinkers of the Enlightenment era, including Thomas Paine (and many of the American founders) and John Stuart Mill.

The second misconception is that while liberalism has a history, its adherents do not value it. To the contrary, liberals care about the rich history behind their ideas — but only insofar as it makes sense to do so. This is where we find the real difference between the conservative and liberal attitudes: not in the historical background of their approach, or in the value they place on that history, but in how they treat tradition in relation to contemporary life.

To illustrate the difference between these approaches, consider the war of pamphlets between Edmund Burke and Thomas Paine. In Reflections on the Revolution in France, Burke argued in favor of continuity (of the French Monarchy) and against revolution (led by liberals). This was echoed by conservative thinkers of the time, who defended the importance of keeping established power arrangements in place while slowly granting small changes, if at all. Thomas Paine, in his pamphlet Rights of Man, defended the uprising from Burke’s charges, arguing that the French Monarchy no longer served to protect its citizens and their natural rights. This aligned with liberal thinkers of this period. On the basis of the new and valuable concept of natural rights rejected divine and monarchic authority, they argued that all people have equal rights and liberties, and should have influence over governance. This desire to change conventional political makeup was not a mere whim.

It is important to note that liberalism does not always imply a complete break with the past, but often just an extension, broadening, or synthesis of more current thinking. For example, Enlightenment thinkers did not call for an end to government (anarchy). They called for a change in government. Or, for another example, consider the battle over gay marriage rights. Liberals do not want to create special rights for gay people. They simply wish to extend existing “civil rights” to a group that has been historically denied them.

On the flip side, it is also important to note that conservatism is not always true to its name, and is sometimes a facade that doesn’t hold up to its name. For example, many American conservatives argue that the definition of marriage should remain the same as it has always been, thereby resisting its extension to gays. Yet, there has actually never been one universal definition of marriage. Rather, the concept has evolved and changed over the past few thousand years. As such, the “conservative” position simply reveals itself to be a mask for bigotry — a way for straight people who don’t like gays to display their abhorrence of a different lifestyle in a manner that is politically acceptable.
Source: rationallyspeaking.blogspot.com