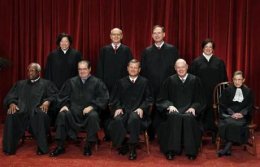 That was 2005. One decade later, the legacy is looking a little different.

The Supreme Court’s three highest-profile decisions since Roberts became the top justice were all decided in favor of liberals: It rejected two challenges from the right to President Obama’s Affordable Care Act, including one on Thursday, ensuring 6 million people would keep their health care.

On Friday, albeit over Roberts’ strenuous objection, the court granted same-sex couples the right to marry, affecting many millions more.

This record has left conservatives spitting fire about a Republican Supreme Court pick who betrayed their cause. Democrats, meanwhile, celebrated in the streets of Washington for two straight days, as Obama is suddenly on a winning streak.

The Psychology of the Political Left & Right - Part 2

The Psychology of the Political Left & Right - Part 1

Is a Liberal or Conservative Born or Made?

The Difference Between the Left and the Right

A far left Liberal versus a far right Conservative